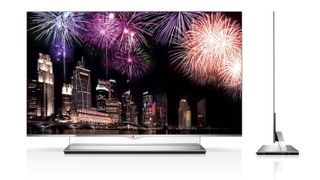 More than 100 people have pre-ordered LG's monster $10,000 55-inch OLED TV set, the company has said. Considering it costs as much as a decent car, that's pretty impressive going.

The TV will start shipping on Monday, though it's only available in South Korea. Still, with these kinds of numbers, LG could see fit to bring it to other countries.

With a ridiculous 100,000,000:1 contrast ratio and a response time 1,000 times faster than LCD (according to LG), it promises to give awesome picture quality. And it should fill that space in the lounge quite nicely until 4K sets arrive.

Samsung also has an OLED TV up its rather large sleeve, though it hasn't announced a launch date. Conflicting reports say it'll either launch next week, just two days after LG's, or that it won't be this year at all.

Either way, it looks like LG will beat it to the punch.

OLED TVs are set to replace LCD models, with higher contrast ratios, and thinner screens. Though it'll be a while before they're a common sight in lounges if prices stay this high.

OLEDs are already used on some smartphones, and have been touted for TVs for some time. Let's hope it's not long before prices take a tumble.