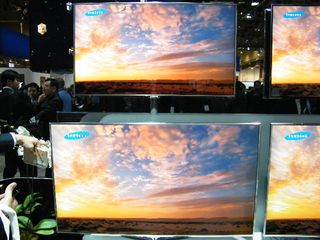 Samsung at CES has always been something of a showstopper. The Korean company managed to wow everyone in 2010 with the launch of the C9000 – a flagship TV that was a design marvel, matched by a great list of specs.

This year, a TV has landed that's rivals the C9000's looks and feature list. The D8000 is an impressive feat in TV manufacturing, boasting an ultra-thin bezel.

Samsung reduced the bezel size by up to 80 per cent and is calling it the One Design bezel.

After eventually dragging our eyes away from the frame, we discovered the TV has been stuffed with new features.

These include: a much-improved UI for Samsung's online Smart Hub; full web browsing capabilities using the same WebKit engine that powers Google TV; and use of social-networking apps such as Twitter, Skype and Facebook.

To get this Smart Hub working, the TV has been equipped with Wi-Fi.

To complement the TV, Samsung has created a brand new remote control, the TwinView Touch Control TV remote. This comes with the TV and can pipe out one television feed on its three-inch screen while you're watching another on your big screen.

The remote control has all the functionality of a PMP and looks like a smartphone.

The D8000 Series also comes with Samsung's new 3D glasses. Instead of using IR, they are now using Bluetooth connectivity and will work for 40 hours on one charge.

The Samsung D8000 series has a UK release date of around April, with UK pricing to still be announced.