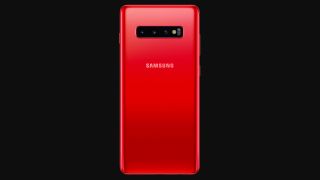 Samsung often releases new color choices for its phones a few months after launch, and for the Galaxy S10 range we're being introduced to Cardinal Red.

Samsung's Galaxy S10 and Galaxy S10 Plus are both now available in the red shade, but so far it's only on sale in Switzerland.

Often Samsung will only release certain colors in limited markets, and rumors suggest this version will only be available in Western Europe and Russia. Of those, sources say it will come to Russia soon, but we've yet to learn whether the UK will fall under the banner of Western Europe for this release.

There's also no word on whether Samsung will offer this red option in the US or Australia, but we'll be sure to update you once we hear the official word on availability.

Cardinal Red is also limited to the 128GB models of the Galaxy S10 and Galaxy S10 Plus. If you want more storage, you won't be able to get such a bold color choice.

Another rumor also suggests the Samsung Galaxy S10e will be getting a Cardinal Red paint job, but that has yet to be made available in Switzerland.

Many looking for a new shade will be happy to know the red version of Samsung's latest flagship is now officially a thing, but the wait may be a little bit longer than we expected for you to be able to buy it.