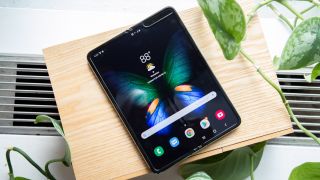 Samsung's first foldable phone is now readily available in a variety of countries, but the company is already hard at work prepping future designs, and one of them may include an S Pen stylus.

Like the Samsung Galaxy Note series, the Galaxy Fold 2 may be able to house its own stylus that can be detached and used on the screen of the device.

This is according to a patent spotted by LetsGoDigital that was apparently filed back in April of this year.

According to the patent, the big innovation here will be the fact you're able to use the stylus on the curved element of the screen while the device is being folded.

The patent seems to be a technology that would allow the stylus to work on the display no matter how the phone is bent as well of course as when the screen is flat.

We wouldn't expect to hear about the Galaxy Fold 2 anytime soon, but a variety of patents have been published by Samsung as it experiments further with folding screen technology, so some of them may point to features that we'll see.