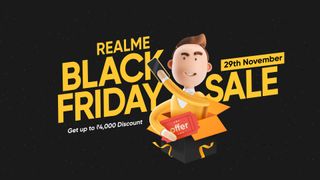 Realme will be hosting a Black Friday sale in India from November 29 on Flipkart and its online store. During the sale, the company will also be hosting a special open sale for its latest and first flagship phone, the Realme X2 Pro.

The phone was launched last week in India and wasn't readily available as it was a part of an invite-only model. After it's first early access sale where more than 2 lakh customers got invites to purchase the Realme X2 Pro, the company will now put the phone on an open sale for 24 hours.

Realme's Black Friday sale will also include deals and offers on other phones, including Realme C2, Realme 3 / 3 Pro, 3i, 5 Pro, and Realme X, among others. The company is offering the same deals under the Big Shopping Days event on Flipkart that's set to begin from December 1.

The recently released Realme X2 Pro and Realme 5s will be available to purchase from the Realme India store during the Black Friday sale. It is an open sale, so interested buyers don't need an invite to buy the X2 Pro.

The open sale will start from midnight November 29 and will go on till 11:59 PM, giving users a 24-hour window to shop for the Realme X2 Pro or the Realme 5s.

Realme has also collaborated with DJI for the Osmo Mobile 3 gimbal. The company will offer a Realme X2 Pro and DJI Osmo Mobile 3 bundle during its Black Friday sale, where users can save Rs 1,000 on the deal.

Realme is also offering discounts of up to Rs 1,000 on the Realme C2, 5, 5 Pro, 3, 3i, Realme X and XT during its Black Friday sale. Moreover, the company is also giving a 10% cashback for users of HDFC debit cards, amounting to a maximum of Rs 500.

Realme 3i also receives a discount of Rs 500 via Realme coupon of the same value, and users can grab it for Rs 7,499 during the sale.

There is no discount on the Realme 5 considering its successor; the Realme 5s was just announced. Likewise, there are no offers for the Realme XT this time apart from the HDFC Bank offer.

Realme Power Bank, which is priced at Rs 1,699, will be available at Rs 999 during the Black Friday sale.