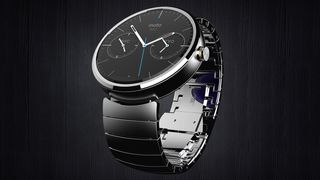 Roll up your sleeves – the Moto 360 could be arriving in less than two months time.

This is just a rumour, so don't go removing that wrist tattoo in preparation just yet, but unnamed sources speaking speaking to French site Le Journal du Geek claim that Motorola's smartwatch will be here this July with a €249 price tag.

That translates to around £203/$341/AU$365. Those nameless sources also say we'll hear more during Google I/O in June.

Watching you watching me

The timing certainly makes sense, with the LG G Watch set to be released before July in the UK for £179.

Since its initial tease, the Moto 360 has become one of the most talked-about smartwatches due to its more traditional wristwatch design.

The display is rumoured to be OLED covered in sapphire glass, and Motorola has said that the device has a secret charging method – could it be wireless? Wireless sounds good.