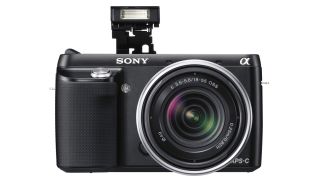 After weeks of speculation and leaks, the Sony NEX-F3 has finally been made official.

The Sony NEX-F3 comes as a replacement for the Sony NEX-C3, which also had a 16.1 megapixel sensor - albeit a different design.

The third generation Bionz processor, which was first debuted on the Sony a77 camera, Sony's flagship DSLT, powers the Sony NEX-F3. This makes it capable of delivering a sensitivity range between ISO 200 and 16,000, and Full HD video recording.

There are several other improvements to the Sony NEX-F3, including the addition of a pop-up flash and increased battery life.

A new 180 degree tiltable screen has been included, to enable easier self-portrait shooting. When shooting in Auto mode, if the screen is tilted to 180 degrees, the camera automatically enters self-portrait mode and sets a self-timer delay of 3 seconds.

Auto portrait framing is also included, which works by cropping an image after the shot has been taken to provide a better composition. The original file is also kept if the user wants to produce their own crop.

Several new additions have been made to the fully automatic Superior Auto mode, including hand-held twilight and Auto HDR. In this mode the camera detects the type of scene it is photographing and automatically selects appropriate settings.

Clear image zoom works in the same way as a digital zoom, but uses Sony's By Pixel Super Resolution interpolation technology to maintain image size and, according to the manufacturer, superior image quality. It provides up to double the magnification of the lens focal length.