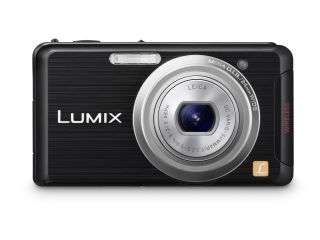 The new Panasonic FX90 is equipped with Wi-Fi connectivity

Using the camera, users can post images to Facebook, Flickr, Picasa or YouTube as well as a new service from Panasonic called "Lumix Club". The club allows photographers to compile log-in information for several different social services in it, meaning they don't need to login individually, and can share on different services simultaneously.

While out and about, users can upload images and videos instantly via mobile networks on a smartphone. Panasonic will provide a free, dedicated app (Lumix Link) for both iPhone and Android users. A dedicated wi-fi button on the camera directly opens up a wi-fi connection.

A newly developed Leica DC VARIO-SUMMARIT 24mm wide-angle lens which stops down to f/2.5 is on board the camera, which allows the use of higher shutter speeds in low lighting situations. Anti-blurring mode can be found on the iA mode.

Intelligent Resolution technology is available on the lens, which extends the zoom ratio by approximately 1.3x, maintaining picture quality even when using a digital zoom. This means the standard 5x optical zoom can be virtually extended to 6.5x.

The camera is equipped with a Venus Engine processor, which is designed to provide low noise images even when used at high ISO sensitivities. Sonic Speed AF and quick-start up times have both been added to make the cameras super quick.

3D photos can be captured in camera by taking 20 panning shots and automatically selecting the two most suitable images, which can be viewed on 3D televisions, photo frames and computers.

The Panasonic FX90 UK release date is set for October, pricing is yet to be confirmed.