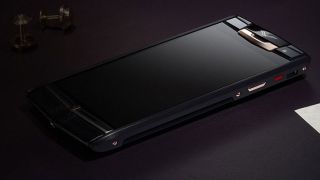 Vertu has admitted that in the past it's produced handsets which not only had an over-the-top design, but were also rather limited when it came to specs.

TechRadar sat down with Vertu CEO, Max Pogliani, who explained that since taking over a year ago the Hampshire-based British firm has seen a dramatic shift in its dynamics.

"I don't want to see any more nice phones with lousy technology inside" Pogliani told us.

"The luxury world has changed, having a showy object to display your wealth is no longer key. There's now a more discreet and understated approach to luxury."

This rings true in the company's latest handset, the Vertu Signature Touch, which dials down the crazy we've seen on previous devices while still retaining premium features such as Sapphire glass, a titanium frame and a hand stitched leather rear.

It does of course come with a one year subscription to Vertu's concierge service, providing you with your own dedicated Lifestyle Manager ensuring you always speak to the same person who gets to know what you do and don't like and thus can provide better recommendations as well as reminders.

Basically it's a living, breathing version of Siri you can hold a proper conversation with.

Vertu isn't trying to compete with the mainstream manufacturers, instead it's content with leading in the niche of luxury smartphones - a market it basically created on its own.

"We want to satisfy a specific category of people who never settle for ordinary in their lives...We are not comparing ourselves to others and thus we're not better or worse, we're just different."

Still a bit pricey though.