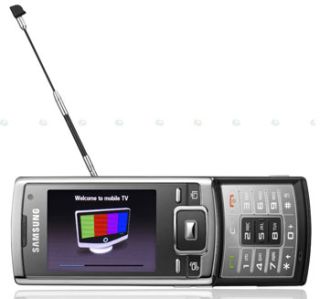 Samsung’s typically breathless press people in Korea contacted us today to share the news that the company is launching “the world’s first mobile TV slider phone”, the P960, which is coming to Europe in a jiffy. However, you may well ask “So what?”

So what indeed – realistically, no one cares that it’s a slider phone at all, what really matters is that the P960 supports two kinds of mobile digital television broadcast, Digital Video Broadcast - Convergence of Broadcast and Mobile Service (DVB-CBMS) and Open Mobile Alliance Mobile Broadcast Service Enabler Suite (OMA-BCAST).

As we can’t exactly choose what standard of mobile digi-TV we receive, the details are pretty irrelevant at this stage, save to say that it’s a safe bet that we’ll be bombarded with telly-equipped phones and more before long.

Japan’s experience with 1-seg and Korea’s with DMB show that watching TV on a phone can be popular, although there’s still an massive headache for the networks over how to make money from free-to-air services.

Two shows at once

Getting back to the P960, it’s a decent-looking phone with plenty going for it, including a 2.6-inch QVGA TFT screen, an EPG, picture in picture (on that screen?) and time-shifting.