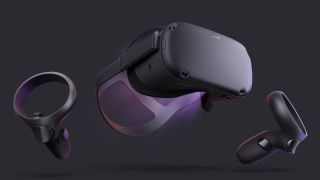 Oculus' VR headsets just keep getting smarter. Shortly after updates to improve Oculus' hand-tracking software and even launch an Amazon Prime Video VR app, the company announced plans to emulate older Oculus platforms on newer models – before the end of the year.

Oculus CTO John Carmack – who was the lead programmer on the early Doom and Quake games at id Software – took to Twitter this week to show how the Oculus Quest would soon be able to run VR games from the Oculus Go platform, and even be able to emulate the older Go controllers "for old apps".

1/3: Go emulation is coming to Quest later this year, by way of a compatibility layer that makes Quest report as a Go and emulate the Go controller for old apps.July 23, 2019

The quest for VR dominance

The Quest was already pretty impressive at launch; as a mid-priced all-in-one headset with movement tracking, six degrees of freedom, and no cables to get in the way, it made a strong argument for VR that doesn't require a high-end PC or external sensors to get a great experience.

The cheaper Oculus Go is a similarly standalone headset – with no wires, that is – acting as Oculus' entry-level offering for getting more people into VR more affordable. It doesn't quite have all the bells and whistles of its more advanced sibling, though, and there are a number of Oculus Go VR games that are still exclusive to the Go platform.

Being able to access Go controllers and games through the Quest will likely only serve a small number of enthusiasts, though – you'd need to have the older controllers or have an interest in some older software for it to really matter to you.

But the move should still strengthen the Oculus ecosystem, and bodes well for backwards compatibility down the line as Oculus' headsets get even more advanced – something that people increasingly demand when jumping between generations of consoles like the upcoming PS5 or Xbox Scarlett.