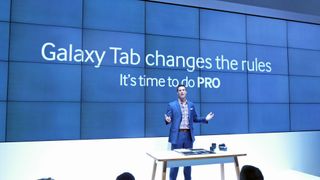 Are the rules now 'make sure you chuck in random words when naming tablets?'

Sitting there watching Samsung unveil the new Tab Pro and Note Pro devices, I was struck with one thought: what on earth does Pro actually mean?

To me, the suffix was always applied to the devices that actually gave you the option to type more effectively, or allow you to do your day job on the go without needing to resort to a larger, more cumbersome machine.

I'm all for Android as an OS, but it's still not quite there in terms of letting the average consumer go about their business in an efficient way. My brother-in-law uses the Galaxy Note 10.1 in his day to day working life and I often get texts asking me if I know of a good app to let him do various workflow-related tasks.

Nobody has yet nailed the 'professional tablet' market yet - Microsoft is closest with the Surface Pro 2 but it's a long way from taking serious market share from laptops in the workplace. Plus, it has a keyboard, which is the one thing nearly every 'pro' user is looking for.

Samsung has called 2014 "a year in which Samsung truly establishes its leadership in the tablet market", yet this market segmentation is going to prevent it from doing just that – this is a company that needs a streamlined tablet range to challenge the likes of the iPads and Surfaces of this world, not confuse consumers with different ranges seemingly offering the same things.

At its booth here in CES Samsung has a dedicated show that runs on a loop, outlining the ways the Note and Tab Pro can help revolutionise your working and personal life. What's noteworthy about this presentation is that there doesn't seem to be a whole lot of content around what makes this a good tablet for the professional.

Therein lies the rub: the Tab and Note Pro range don't seem to be geared towards making your working life any slicker at all. Well, that's not strictly true – as someone pointed out to me, the Note Pro 12.2 device is great for graphic designers, pushing technology into those creative hands that usually would cost thousands.

But the Pro range simply makes no sense with that moniker. The power, the screen quality, even the re-designed Magazine UI (which is a pretty messy affair) all scream of a company wanting to make a really good tablet to prove continued relevance in a world dominated by Apple and break-even tablets from Amazon and Google.

Samsung is a company that suffers from agitation when it comes to full innovation – since becoming the dominant player in the smartphone world its been full focused on evolution over revolution, and this 'Pro' release is another example of that.

It's all the more frustrating given that underneath this confused exterior lies a company with a real passion for product, and the ability to make stunning pieces of machinery.

It's no accident that Samsung has nearly a fifth of the tablet market share worldwide and is gaining on Apple rapidly – cynics could point to a gargantuan marketing budget that keeps consumers buying, but loyalty only comes when products are usable.

Of course consumers need choice, but Samsung's tablet range is too sprawling at the moment, and the Pro team just makes that worse. At current count, Samsung has 11 different tablets on the market (not including Wi-Fi and 3G variants) compared to Google's two and Apple's four.

How is a consumer supposed to know which tablet is right for them? The Tab 3 8.0 or 7.0, which have a vastly different spec list? Should they get one with an S Pen or not? Do the newer models offer enough of an upgrade to warrant spending the extra cash?

Samsung will argue it's offering choice, but consumers need help in nascent markets. It's so frustrating that Samsung doesn't focus its efforts on true flagship tablets in the same way it does with phones. The Galaxy S4 in one option, the S4 mini is there for those that want a little lower cost. Want a powerful device with a larger screen? Note 3. Easy.

The Pro range are powerful tablets that don't compromise and are truly viable Android alternatives to the iPad or iPad mini. But they're not professional devices, merely really well specified units with added protection and a few subscriptions bunged in.

Consumers like choice, but they like to know their options. With so many tablets at each screen size, the question will be 'Should I get the iPad Air, the Nexus 10 or… which Samsung is the good one?' when it should be 'I want the new iPad, but I really like the look of Samsung's new Tab / Note'.

So come on Samsung – choose your heavyweight, middleweight and lightweight, and make them truly exceptional (and lower the price while you're there if possible too). Let people understand what makes your stuff so great without feeling like you need to wrap it in marketing or flashy-but-useless features.

Or just sell the Pro with a keyboard.