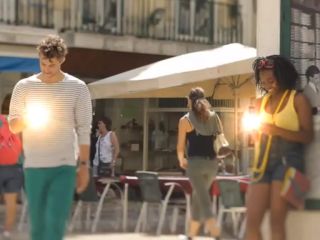 Samsung has launched a pair of teaser videos, warming its mobile fans up for the announcements it plans to make at IFA 2011.

One video is pretty clearly hinting at a phone of some kind, with the tag line "Something big is coming" easily translated from marketing speak into "Something new is coming".

We don't think it'll be the massive 4.65-inch Ice Cream Sandwich phone that we know Samsung has in the works, but it could be any one of a number of lower-spec Android or Windows Phone 7 Mango phones.

The other video is more ambiguous; titled Samsung Mobile Unpacked 2011 Episode 11, it shows us sunlight shining through tree branches, slow motion children playing on a beach, the sun rising over breaking waves, some kind of propeller thing and a tattered yellow flag buffeted by the wind.

Frankly, it could be anything, but we're willing to bet that something as pointlessly arty as this is going to be a tablet; could Samsung be referring to the 7-inch Android Honeycomb tablet that we spied in the Samsung roadmap leak yesterday?

Probably, yeah. Not long to wait until we find out anyway; all will be revealed at IFA 2011 on 1 September.