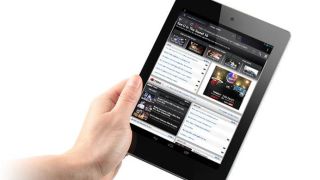 Should the iPad mini be worried?

The Acer Iconia A1 has just been officially unveiled by the Taiwanese firm sporting a form factor which could rival the iPad mini and a price which will make your bank manager very happy.

Packing a 7.9-inch, 1024 x 768 display the screen on the Iconia A1 is the same size and resolution as found on Apple's pint sized tab, and Acer's new slate doesn't shy away in the power stakes either with a 1.2GHz quad-core processor under the hood.

In terms of other specs the Iconia A1 rocks up with a 5MP rear facing camera, 8GB and 16GB storage options, microSD slot, Wi-Fi, optional 3G, Bluetooth 4.0 and a couple of connectivity ports in the form of microUSB and microHDMI.

At 410g the Acer Iconia A1 is going to be noticeably heavier than its Apple competition, plus the 11.1mm thick chassis makes this tablet one of the chunkier options on the market.

Rumours surrounding this tablet suggest the Iconia A1 will run Android 4.2 Jelly Bean, although this detail hasn't been released by Acer yet - we'll get it confirmed as soon as possible.

So it may not just be the iPad mini which needs to watch its back, but also the likes of the Google Nexus 7, Amazon Kindle Fire HD and Samsung Galaxy Note 8.0.

There's more from the firm too, with the 7-inch Iconia B1 tablet receiving a quick nip and tuck procedure to give it a fresh new look.

It's not just an aesthetical make-over though with Acer also doing some tinkering under the hood with the addition of a 3G option and 1GB of RAM - up from 512MB in the original.