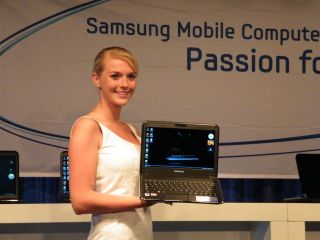 Following on from this morning's N-Series netbook launches, Samsung has added to its X-Series thin-and-light range. Last year's X360 will be retained, but we've now got the X520, X420 and X120 to go alongside.

Samsung Product Manager Daniel Hill told TechRadar that only the X120 will launch initially in the UK with Windows XP, but that it "will be refreshed" and the other two models introduced when Windows 7 launches on 22 October. Hill couldn't confirm the version of Windows 7 that would launch on the X-Series.

The X120 will launch with the Intel Core 2 Solo, while the other two models will have Core 2 Duo chips. Memory will vary between 2-4GB while storage will be between 160-500GB. All have Intel GMA 4500MHD integrated graphics.

HDMI is included on all three, as are three USB ports, webcam and a memory card reader.