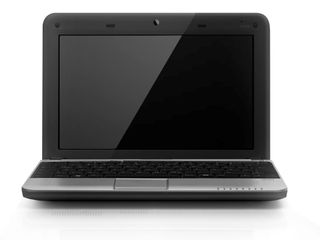 If you are a gentleman of the fat fingered persuasion who, like us, cannot quite get to grips with the smaller Eee PCs and other mini-keyboard netbooks on the market, then Medion's new comfy keyboard netbook, being offered at a bargainous £299 by Sainsbury's right now, could be your manbag 'puter of choice.

Following a limited introductory promotion in cheapo supermarket chain Aldi, Medion informs us that its "stylish new black and silver 10-inch notebook is now on sale in Sainsbury's stores nationwide, priced at £299.99 including VAT."

Don't drop it though!

What it lacks in the way of a solid state drive (so don't drop it or bang it about too much!) it more than makes up for in other specs, packing in 1GB RAM, an 80GB hard drive and powered by a 1.2GHz Intel Atom-based processor.

The Medion Akoya Mini E1210 features a 10-inch screen (which is apparently easy to read outdoors) and has a full-sized keyboard and the latest Draft-N to make the most of those increasingly free Wi-Fi hotspots popping up across town.