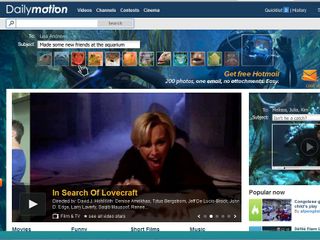 Orange has made a surprise acquisition for France-based video site DailyMotion.

A cool 49 per cent of the YouTube rival has been snapped up by telecoms company Orange for €59 million, with more of the website to be bought up in the near future.

DailyMotion hasn't had the same success as YouTube in terms of audience figures, but it still figures regularly in the top 50 visited sites in the world – with around 90 million uniques and 1 billion videos streamed a month.

Its history is closely linked with YouTube – both of the sites were registered within one month of each other.

Currently DailyMotion is the second biggest video-upload site in the world, with YouTube some way in front. Instead of relying on the general public for the majority of its content, though, it's gained through myriad licenses with TV and film studios.

DailyMotion is starting to see some success in the US, too, with the site's viewing figures up 57 per cent in the country at the tail end of 2010.

Orange looks likely to try to buy the rest of DailyMotion as soon as it can, because it is likely Orange wants to own the whole company and not just 49 per cent of it.