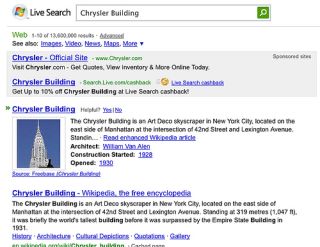 Freebase Answers up and running

Microsoft has started to integrate semantic search into its Live search product – as it tries once more to snaffle back some of the market from rivals Google.

The Redmond-based software giants snapped up startup Powerset for a reported £50m so it could get its hands on some fairly impressive semantic tools.

Powerset had illustrated its technology with Wikipedia pages, and this information source will remain in the Live engine in a limited test as captions for Wikipedia results are improved.

But, Microsoft will also use Powerset's tools in its Factz engine for related searches and 'Freebase Answers'.

"We have plans for deeper integration in the future, but these projects gave us an opportunity to get to know our colleagues up in Redmond and drive greater understanding of our respective technologies, said official Microsoft blogger Mark Johnson.

"All of these projects are currently being "flighted" on Live Search, which means that they are being shown only to a small percentage of users (if you get one, consider yourself lucky!).

"Once we've gotten data back from the tests, we'll plan next steps and decide what features will eventually roll into the product."

Semantic search is expected to be a major factor in the next generation of search, but Google is no doubt beavering away on its own technology in this area.

For the time being, however, Microsoft will be desperate to show that its foray into search is not going to prove an abject failure.