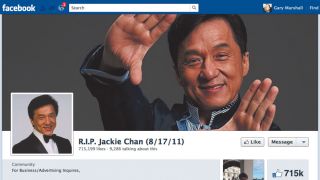 Despite him being very much alive, there are more than 50 'RIP Jackie Chan' pages on Facebook

The news spread across our Facebook network like wildfire: a man had tried to abduct a child in broad daylight outside the local primary school. The original post was shared and shared, and shared again until almost every parent in the area knew about it. It wasn't true.

On the third night of the London riots, Twitter was aflame with stories of dozens of hooded teenagers heading towards Holloway, bent on destruction, while other rioters freed animals from London Zoo. A photo showed the London Eye on fire. The stories weren't true. The photo was fake.

In January, panicked reports spread on Twitter that a lone gunman was running amok in London's Oxford Street, that people should stay indoors and that armed police were on the scene. That wasn't true either.

Facebook, Twitter and other social networks are superb places to discover breaking news, but all too often the stories people spread are exaggerated, mis-informed or even completely invented. How can you tell which is which? Read on to discover how to play detective, and how to separate world-changing stories from falsehoods and fraud.

The first category is quite common: all it takes is for somebody to mistranslate a foreign news item, to press the wrong button on a content management system, or to enter the wrong code in a form field and an incorrect story is posted, a pre-written obituary goes live by accident, or a product page is published with completely inaccurate information. Someone spots it, and within minutes it's all over social networks like a rash.

A particularly good example of a cock-up is the assassination in Beijing of North Korean dictator Kim Jong-Un, which was reported by several sites in February. The story was posted to Twitter by @BBCLiveNews, and news and gossip site Gawker put the story on its front page. However, Jong-Un hadn't been to Beijing and wasn't dead.

The BBC Twitter account was a fake one (the real one is @BBCNews), and Gawker was simply reposting rumours that had spread on the Chinese equivalent of Twitter, Weibo, about what turned out to be a commemoration of the life of Jong-Un's late father. As Gawker put it in a follow-up post: "The ruckus yesterday that prompted rumours of his demise was probably just a killer birthday party for his dad."

Distortions are harder to spot, because there's a grain of truth to them. For example, last year there were online calls for Jeremy Clarkson to be sacked when he apparently told BBC's The One Show that striking public sector workers should be shot.

Footage and transcripts of his comments quickly circulated online, proving that he did indeed say that, but whether by accident or design, the footage was edited in such a way that Clarkson's comments were taken out of context, making them seem much more inflammatory than they actually were.

Jeremy Clarkson wind-ups aren't particularly important, but other distortions are more serious. Many dubious and potentially dangerous health-related scams and scares distort genuine scientific research to sell snake oil, or make people panic about things they shouldn't, and the results can be serious: for example, online anti-vaccine scares mean that many parents aren't getting their children vaccinated against extremely dangerous diseases - diseases that could affect not just those children, but the people they come into contact with, too.

Last but not least, we have outright fibs. In August, news outlets including the BBC, CNN, Forbes and the Daily Mail all reported that Internet Explorer users were significantly thicker than users of other browsers.

That may well be true, but the study upon which they based their reports was bogus. It, and the company it supposedly came from, were invented by hoaxers who'd found IE "really hard to work with" and decided to have a laugh at Microsoft's expense. They created a fake website, grabbed images from a French research company's site and sent out some emails.

The same tactics, of course, are used by phishing sites to try to get your bank details. In much the same way that people fall for phishing scams because the sites look believable, we fall for and share fibs because they sound plausible.

Death is not the end

One of the most common kinds of falsehood is the fake celebrity death, when news of a famous person's demise spreads across social networks. Unfortunately - but fortunately for the people concerned - not everybody who's reported dead actually is.

The most recent example occurred in May, when reports spread online that the Nobel prize-winning writer Gabriel García Márquez had died. He hadn't, and the account that broke the 'news' of his death proved to be a fake one set up in the name of fellow author Umberto Eco.

Similar stories have circulated about Kanye West, Morgan Freeman, Jeff Goldblum, Charlie Sheen, Jon Bon Jovi, the Pope and Margaret Thatcher, but the most 'dead' living person on social networks may well be Jackie Chan. At the time of writing there are more than 50 dedicated 'RIP Jackie Chan' memorial pages on Facebook, even though the martial arts superstar is very much alive.

Sometimes the stories are created for malicious reasons, such as a hatred of the person concerned, but in many cases the motivation is mere pranksterism, and the story is created for no other reason than to see how many people it can hoodwink.

Such hoaxes are among the easiest to verify; mainstream news sites and their related social media accounts are quick to check such claims and publish them if they're true, so it's a good idea to see if the news has reached @Reuters, @BBCNews or @SkyNews before you retweet.

Hoaxes aren't limited to celebrity deaths. They tend to turn up during major events like natural disasters, too. When L'Aquila in Italy was hit by an earthquake in 2009, the respected Italian newspaper Corriere Della Sera ran a photo of the devastation on its front page.

The photo, unfortunately, wasn't of the Italian earthquake, but of an earthquake that happened in China a year before. The hoaxer had simply lifted the image from Flickr and sent it in.

Markham Nolan is the managing editor of Storyful, which uses social media to discover, verify and illuminate stories for some of the world's best-known media outlets. A big part of that means spotting fakes and wrongly credited media files.

"We've seen pictures emerge quickly from incidents like the Zanzibar ferry disaster and the recent Houla massacre that we've been able to quickly debunk to save our clients from embarrassing themselves," Nolan explained, "but often people will try to pass off video of similar events as current news events.

The recent earthquake and tsunami threat off Indonesia saw several people pointing to videos of the 2004 Aceh tsunami, re-titled to claim that they were from Thai beaches in 2012."

Why would people do that? "It's hard to say," Nolan says. "Some of it is spam, with uploaders/scrapers of video trying to bait people to click links in the video description. Some of it tends to be pure attention-seeking for no discernible purpose, and some of it is pure naivety - people seeing a video, making a flawed leap in logic and thinking they're contributing to the spread of news by re-uploading content that actively serves to make real news harder to find."

Such content can spread rapidly. "People underestimate the reach and influence of one video on YouTube," Nolan says. "With an errant mention or tweet from one influencer, a video can rack up hundreds and thousands of hits in just a few hours."

False content can be the bane of newspaper and website picture desks, but technology can help filter out the fakes. For example, if you think an image may not be what it purports to be, you can run it through TinEye.

TinEye is a reverse image search: simply upload the image you're suspicious about or paste in its URL, then hit 'Search', and the website compares it against a database of more than 2 billion images. If the image has circulated online, there's a good chance TinEye will know about it. Not only that, but it can tell you whether the image has been modified and where it's been used, so it's as appropriate for checking supposed product photos on eBay as it is for debunking social media hoaxes.

There's a long tradition of photographic tomfoolery online, and images are frequently edited to show things that didn't actually happen. The famous photo of Harrods, where the building's lights had been changed by a disgruntled employee to spell out an expletive, is a good example: the swearing was done in an image editor by satirical website The Poke.

Images of this kind are a type of gullibility test. Is it really likely that an angry employee would be able to access the lights, change them to spell out anything at all, and have them on long enough not only to be noticed, but for someone to turn up with a good camera to get a shot of it? And even if all of those things did happen, wouldn't you have heard about it on the news rather than via Twitter the following day?

The rumours about London rioters releasing dangerous animals from London Zoo were partly fuelled by a fake photo too. Images that supposedly showed an escaped tiger in Primrose Hill were indeed of a tiger, but one that had escaped from an Italian circus four years previously.

Another image, apparently showing the army preparing its tanks in Bank, was a photo from the Arab Spring uprising in Egypt.

Not all hoaxes are so easy to debunk, however. Images can be cloned to make small crowds look like big ones - a trick that dictators are particularly fond of - or cropped to remove important details. They can be airbrushed to change people's appearance, to add in items from other photographs, to add physical impossibilities, or to remove people altogether.

It can sometimes be exceptionally difficult to spot the alterations, but look for giveaways such as inconsistent lighting or skin tones, repeating elements (a sure sign that a clone brush has been used), shadows going in the wrong direction, missing reflections or enormous great white sharks attacking helicopters.

More sensibly, you can also check the image's EXIF data, which can tell you when an image was created, what type of camera it was shot on and whether it's been fiddled with. The quickest way to do that is to run the URL through an online EXIF data checker such as Jeffrey's EXIF Viewer. There's more.

The BBC's User Generated Content Hub carries out very detailed checks on images and video: ensuring that the language matches the location, checking images against maps, examining weather reports for the supposed location and date, checking that car registration plates match the country they're supposed to be in, and in one case getting an eyewitness to point their camera out of the window to prove that they were where they claimed to be.

That's overkill for something like a funny image of Rihanna, of course, but the BBC's UGC hub deals with images from flashpoints around the world, and falling for a hoax could inflame tensions and perhaps even cost lives.