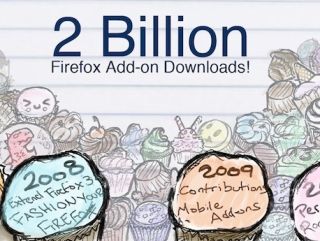 Mozilla is celebrating a major landmark for Firefox, with two billion add-ons downloaded for the popular browser.

Despite an increasing amount of competition, Firefox is still the second most used browser on the planet, with only Microsoft's Internet Explorer holding a greater market share, and add-ons have been a key part of its rise to popularity.

"Today marks a very special occasion in the world of Firefox Add-ons as we cross the 2 Billion download marker," states the Rock Your Firefox blog.

"We have a lot of people to thank for helping us reach this milestone: most of all, you!"

The Firefox team acknowledged that they had smashed the internal target they had set for reaching the two billion mark.

"When we reached 1 billion Firefox Add-on downloads in November 2008, we thought it would take us less than 3 years to get to the next billion, and with your help, we've gotten to 2 billion in half that time!" the team blogged.

"With more than 150 million add-ons in use every day, we know that the next billion add-on downloads will be here before we know it."

However, as the graph that Mozilla released shows, although growth is still phenomenal it is beginning to flatten as competition form browsers such as Chrome begins to slow take-up of Firefox.

With a major chunk of the market now using Firefox, Mozilla will be very aware that there are now major names like Google and Apple snapping at their heels, as well as Microsoft trying hard to improve its dominant Internet Explorer browser with IE9.