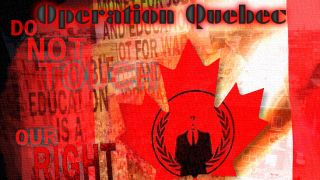 Race is on for Anonymous

Hacking collective Anonymous has threatened to take down websites linked to the upcoming F1 Grand Prix in Canada.

According to Anonymous, the reasoning for the proposed computer hack is because the organisers of the F1 are to go ahead with a Grand Prix in a place that "Amnesty International and other global human rights groups have declared human rights violators".

This is to do with Quebec's use of Special Law 78, which offers up stern regulations over demonstrations in the province – meaning students who are found to be striking or demonstrating can expect heavy fines for having their say.

The Montreal Grand Prix is set for the weekend of June 8 to 10, but Anonymous is warning anyone taking part in the F1 may be subject to a hack – something it did when the F1 took place in Bahrain in April.

"As we did in Bahrain - Anonymous intends to wreck Mr Eccelstone's little party," explained an Anonymous spokesperson.

"Beginning on June 7 and running through race day on June 10, Anonymous will take down all the F1 websites, dump the servers and databases - and wreck anything else F1 related we can find on the internet.

"We would like to remind anyone considering attending this abominable race, that last time Anonymous found all the spectators personal data, including credit card numbers - un-encrypted on F1 servers."

Anonymous will be among many protesters targetting the Grand Prix. A number of students are also set to protest, something that the F1's orginisers will be wary of, considering the race could bring around $100 million (Canadian dollars) to the area.

The statement continued: "We highly suggest that you join the boycott of the F1 in Montreal and we certainly recommend that you NOT purchase any tickets or F1 merchandise online.

"You have been warned."