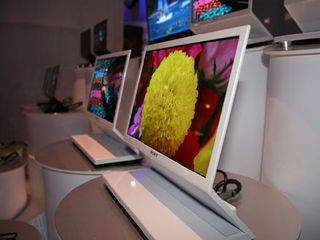 Samsung has once again been making noises about OLED TV, and promised that it will be coming soon.

Samsung has also confirmed that it sees OLED display as an excellent option for 3D TV – with its fast response time and deep contrast ratios it would make sense for the two technologies to mix.

However, given that Samsung has long talked up how it is the only OLED producer in mass production at the moment, it's odd that it doesn't already have an OLED TV in the marketplace, especially given that Asian rivals Sony and LG have both launched a 14- and 15-inch display respectively.

Samsung once again wouldn't be drawn on a timeframe for a new OLED TV, but did say that 3D TVs with OLED technology will be 'a few years down the line' in an interview with bnet.

Check out the video for yourself: if you're an OLED fan, you might want to skip past the obvious questions at the start, but it's good to see Samsung talking so openly about the future of the OLED display.