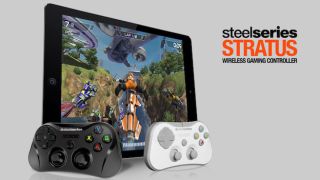 It's fair to say that the iOS 7 controllers for various Apple devices have failed to set the world alight so far, but Steelseries is hoping that its Stratus Wireless Gaming controller will change all that.

The first wireless controller for iOS 7, the Stratus will be familiar to anyone who has picked up a console controller - and offers the requisite set of buttons, sticks, pads and triggers.

As you would expect from an Apple-friendly device, it's AirPlay enabled and will play (probably) nicely with iPad, iPhone and iPods capable of running the latest OS.

The company insists that this changes the gaming landscape, but you'll obviously first have to find a stand or handy part of your anatomy that enables you to keep both mitts on a controller and keep the screen of your device visible.

if you can cross that particular bridge then you can see if the controller really does solve the old 'gaming's better with buttons' quandry that has plagued mobile phone and tablet gaming from the off.

There's a dedicated pairing button, a quoted battery life of ten hours and you can connect up to four devices.