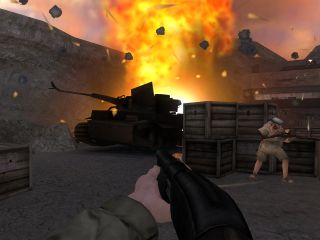 We call it Medal of Honour in our heads anyway - so there.

As if being described as 'un-British' by the defence secretary wasn't enough, EA's Medal of Honor has scored another PR win with the news that

The One That Got Away

author Chris Ryan is penning a

Ryan is of course responsible for some of the bestselling men with guns thrillers around, and another of his books – Strike Back – was recently screened on Sky.

But not content with television, film and books, the former SAS man is now penning a prequel book for EA's Medal of Honor series.

Now we don't want to anger a man who could kill us with the top off of his biro, but we can't help but wonder if he'll be sticking the 'u' back in 'Honor'.

"It is a real privilege to be involved in a game with such a heritage as Medal of Honor," said Ryan.

"Combining my experience as an SAS soldier in the Gulf War with missions from the videogame itself enabled me to create an authentic and respectful account of an elite soldier fighting in Afghanistan for Medal of Honor: The Book.

"Bringing together the disciplines of literature and videogames has been a new but compelling experience for me as a writer, resulting in what is hopefully an engaging read for fans of videogames and novels alike."

It's not been long since it emerged that Richard Morgan had penned the story for Crysis 2, and it's becoming increasingly apparent that gaming is a world that writers are keen to get involved with.

But rumours of JK Rowling's post-Harry Potter project being to write a (Hog)warts and all expose on Donkey Kong are probably wide of the mark.