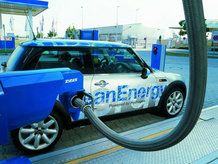 Hydrogen could be cheap as chips soon

Researchers at the S&P Energy Research Institute in Korea think they might have finally found a way to produce hydrogen efficiently.

Current methods use electrolysis to split the gas from water molecules, requiring a lot of energy and negating the emissions-free aspect of the fuel type.

But Doctor of Science Sen Kim at SPERI believes his team has found a way to counteract the need for so much energy input, thus making it almost completely clean.

"Manufacturing the hydrogen by our method will lower its cost as much as 20-30 times. As hydrogen energy is clean (only water when burned), and plenty of water is available on the earth, hydrogen energy can be called 'permanent clean energy'."

However, this isn't the first time such a claim has been made, but until such reductions in processing efficiency can be found, we'll have to keep driving around in our noisy, smelly and polluting cars... even though they make great sounds and can drive really fast.