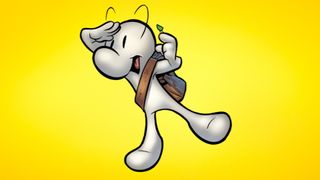 Netflix has announced that it's secured the rights to comic book series, Bone, and it will be developing an animated kid's show based on the Jeff Smith creation that sold millions of copies around the world.

The Bone Netflix show will follow the "iconic Bone cousins on an adventure through a vast, uncharted desert and into a mysterious valley filled with wonderful and terrifying creatures," according a press release from the streaming giant.

Smith, the creator of the Bone comic book series, says that he's waited a long time for it to be developed into an animated show:

"Netflix is the perfect home for Bone. Fans of the books know that the story develops chapter by chapter and book by book."

So, what is Bone?

Since 1991, Bone has been published in over 30 countries, with over eight million copies sold in North America alone.

The series follows cutesy bald cartoon characters, the Bone cousins, as they journey through the desert after being kicked out of their hometown, Boneville.

During their travels, the three cousins encounter strange creatures and mysteries that draw them into a bigger quest than they ever imagined when they first left Boneville.

Right now, there's no word on a release date, or even any mention of who's involved with the project – so, don't expect to see the Bone Netflix TV show until at least 2020.

The new series joins a flurry of animated shows and movies that are expected to arrive on the streaming platform in the coming years. This is because Netflix has struck a multi-year deal with the creators of animated coming-of-age comedy Big Mouth, which will see the team creating a bevy of animated projects for the streaming giant through their production company, Brutus Pink.

Compared to other platforms like Amazon Prime Video, Netflix is home to a huge number of animated shows, particularly those aimed at older viewers like Matt Groening's Disenchantment, Rick and Morty, and F is For Family.

However, with Disney Plus looming on the horizon, the streaming giant could be about to lose its crown as cartoon king – after all, Disney Plus is expected to house every single Disney film in existence, which includes masses of animated content.

Will Bone save the day for Netflix? Only time will tell.