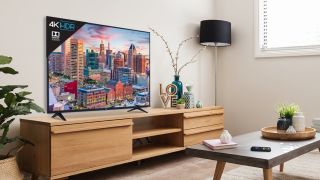 The best 40-inch TVs shouldn't be underestimated just because of their smaller size. Just a few years ago, 40-inch TVs were considered the pinnacle of flatscreen entertainment – and even if they've since been dethroned by the new flagship size, 55 inches, and the even larger 65-inch and 75-inch ranges, there's still plenty to recommend sticking to a 40-inch display.

For those of us without giant homes, a 40-inch TV is a great way to stop your home television from overwhelming a room or taking up a whole load of wall space, with the portability to move or store it somewhere relatively easily.

A big perk of these sets is the price, too: 40-inch TVs tend to go for a lot cheaper than their larger counterparts, even if there aren't as many sets made in this size these days.

The biggest drawback with choosing a 40-inch screen rather than one of the bigger options is that you don't always get the latest tech built into a 40-inch TV – like OLED panels or often 4K or HDR. TV manufacturers tend to save the best performance for the biggest models in their range.

But the good news is that we know not all TVs and TV brands are created equal. There are a number of exceptional 40-inch 4K HDR TVs at a reasonable price and we've done all the hard work and research for you. The result is a list that we think represent the best 40-inch TVs on the market right now. (If you're in the US, too, you'll want to focus on options 2, 3 or 5.)

Before we dive into our recommendations, it's worth going over what we look for when we're reviewing and recommending TVs here on TechRadar.

Ultra HD vs Full HD: That you can’t see a difference between Full HD and Ultra HD on a screen smaller than 55 inches is a common misconception. If you take your time and really look at a picture – especially if that picture is using High Dynamic Range – you will see a difference.

We recommend picking a TV with 4K Ultra-HD and HDR if you can find one. They’re not the standard at this screen size, as the cost can outweigh the benefits for someone shopping for an ultra-cheap TV, but if you're serious about video, 4K is vital.

Operating system: 40-inch TVs didn't always come with a smart TV operating system in the past. These dumb TVs were incredibly cheap to make, and therefore cheap to buy, too. But there was a problem: as Netflix and YouTube became more and more popular, people wanted to stream those services on their TV without resorting to a streaming video device like a Roku, Amazon Fire TV Stick or Chromecast.

These days, it's fairly easy to find good Smart TV on a 40-inch TV. All but the most bare-bones of screens will have them. What you're looking for, ideally, is a well-maintained operating system like Roku TV, LG's webOS or Samsung's Tizen operating system. If you go with a TV that uses a proprietary operating system (basically an operating system exclusive to that one TV) you might have some serious issues down the road.

Inputs and outputs: Connections seem boring, but trust us – this is something most folks don't think about until they bring the TV home and get it all connected, only to realize their great new TV only has one HDMI port.

Having multiple HDMI ports (along with options for optical audio out and RCA connectors) allow you to connect most – if not all – of your devices. This will save you time in the long run as you won't have to get up and switch the cables around any time you want to change the input.

Now you know exactly what you're looking for in a brand new 40-inch screen, here are a few of our favorite TVs that we think would be a great addition to your home entertainment center.

Undoubtedly one of the best TV offerings to have come out of 2019, the Panasonic GX800 hits that sweet spot of price, performance, and functionality, starting at £649 for the 40-inch model.

With Panasonic leaning more on OLED TVs these days, you’d be forgiven for thinking the LED sets in the 2019 Panasonic TV range might not be up to scratch, but the GX800’s HCX processor is more than up to the task. Both HD and 4K images are impressive, while the multi-HDR support (HDR10, HDR10+, Dolby Vision, HLG) is a masterstroke is such an affordable price.

You won’t be getting the full effect of all those formats on this panel – you’ll need to consider a larger, more expensive set like the GZ1000 or GZ1500 to do that – but you’ll also never find yourself unable to play a certain kind of HDR content again.

A 43-inch QLED panel, with some compromises

When it comes to the best Samsung TVs, it’s all about QLED. The super-bright QLED displays offer hundred more nits brightness than most LEDs, with a quantum dot filter to enhance contrast across a 4K display.

The Q60R isn’t quite as accomplished as its premium siblings, being the entry-level QLED and therefore the one with the lowest specs. The edge-lighting can be inconsistent, and you won’t get the tidy One Connect box of other premium Samsung TVs either.

Given its 43-inch size, though, you won’t be taking up as much space as a larger set, and as the cheapest QLED to come out this year it’s a smart choice for those wanting to save on high-end technology. Its low input lag and responsive smart platform make it a great choice for gamers wanting a zippy experience – or just anyone feeling impatient.

3. Vizio M-Series Quantum (US only)

Quantum dot technology on the cheap, in a 43-inch panel

Vizio has repeatedly put out mid-range sets deserving of our various best guides, and the M-Series Quantum is no exception. It features a brilliant quantum dot display at a surprisingly decent price, with a capable sound performance (2x20W speakers) to match the pictures onscreen.

HDR images are a particular highlight, with Dolby Vision support and local dimming helping to reach those deep black levels.

Vizio’s SmartCast smart TV platform isn’t the best out there, but it does come with a lot of functionality, including support for Google Cast and AirPlay 2, and HDMI Arc for controlling your soundbar through the TV controls. Overall, the compromises are more than fair for the sub-$800 price tag, and you won’t get much better for the money elsewhere.

A 43-inch TV with three-sided Ambilight

Like the Panasonic GX800, the Philips 6800 offers a wide range of HDR support in its small size, with both HDR10+ and Dolby Vision baked into the panel.

The TV’s casing itself is sleek and fashionable, with three-sided Ambilight upping the atmosphere with colors that spill and project around the TV screen. What could be better for an immersive night gaming or watching a film?

The outside of the set may be its most impressive aspect, though. The 4K display is best for HD, and can struggle with lower-resolution sources. You’ll also want to look at the TV square-on rather than from the side, as viewing angles aren’t the best. Overall, though, this a solid choice for a smaller set.

A solid mid-level TV, propped up by Roku's smart platform

TCL has some of the strongest mid-range sets out there. While the TCL 6 Series offers a pretty big jump in quality, only the 5 Series goes down the super convenient 43-inch size so many TV models are leaving behind these days.

So what do you get with a TCL 5 Series TV? While the design of the set itself is pretty nondescript – with some messy cabling around the back – the inclusion of the Roku smart TV platform makes for a fast and well-organized interface. HD/SDR images too are right at home, with good color balance and clarity even on the Ultra HD screen.

4K/HDR isn’t quite as impressive, without the luminance to really make those added colors shine, but for everyday watching the TCL 5 Series is solid bet.

Worried you might be skimping on quality at a smaller size? Don't be, as Samsung has once again proved that you can pack in a capable panel and processor even for an affordable price.

The RU7470 is technically a UK-only set – and exclusive to Currys – though its close sibling, the RU7100, should offer a similar experience elsewhere. And with 4K resolution, HDR support, and even HR10+ (which isn't usually found in such a cheap set), there's plenty to recommend it.

For a more impressive panel, you'll want the Samsung Q60R QLED listed above, but if you're more interested in affordability than a high-spec display, the RU7470 should be able to meet your needs.

Viewing angles could be better, but if you're not crowding a number of people around such a modestly-sized screen, you likely won't run into trouble too often.

If you're after a new television, there are few times better than Black Friday – the massive sales event that sees discounts on a wide range of gadgets, including televisions.

It's usually older televisions that get the most savings, as retailers try to clear out stock before new models come in. If you're not bothered about having the most advanced tech on the market, then it might be the best way to get your hands on a quality television from last year's cohort.

Keep in mind smaller 40-inch TVs won't have as large savings as larger sets. While you might see a good £500 / $500 / AU$750 off a 65-inch OLED TV, something on the smaller side may not cost that amount in the first place – and even a couple of hundred in savings can mark a good deal.