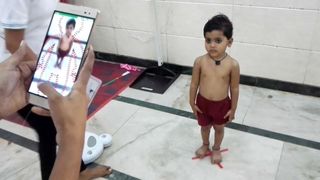 Welthungerhilfe, one of Germany's largest private aid organisations, in collaboration with the India chapter of Action Against Hunger, has launched an app called Child Growth Monitor.

The app uses Microsoft's Artificial Intelligence technology to monitor children's growth and levels of nutrition, and helps in fighting malnutrition. Child Growth Monitor has been launched as a pilot project in India.

The app scans nearly 10,000 children under the age of five for signs of malnutrition. It is powered by Microsoft Azure and AI services. The claim is that the app can detect malnutrition in children, which will allow for better and faster care to the affected children, before the effects become chronic.

12 teams of 150 trained health workers each will be given smartphones loaded with the Child Growth Monitor app, in order to collect the required data. The app uses the smartphone's infrared sensors to capture the child's measurements and data in 3D. The data thus collected is then uploaded onto the Azure Cloud database, and the 3D scans are evaluated by nutritionists and IT specialists using Microsoft's Azure AI solutions.

The child's dietary health is analysed, conclusions reached and communicated to the health worker, and can then be used by them to address the child's specific dietary requirements.

According to Microsoft, the app has a learning algorithm, which gets smarter with every measurement. This pilot project is being conducted across the states of Maharashtra, Madhya Pradesh, and Rajasthan till March 2019.