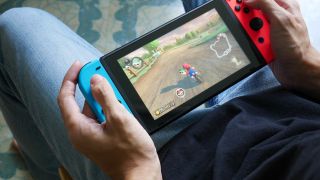 If you're keeping an eye out for Nintendo Switch Black Friday deals, TechRadar is the place you'll want to bookmark as we'll be bringing you the very best offers as they appear.

The Nintendo Switch may have saved the Japanese company. Not long ago, there were rumors of Mario, Link, Samus and the like appearing on other platforms - such was the disappointment of the Wii U last generation.

Fast forward to today, two and a half years from the Switch's launch, and the console has taken the gaming world by storm. With Black Friday and Cyber Monday approaching, is now a good time to pick up a Nintendo Switch?

Is the Nintendo Switch right for you?

For the uninitiated, the Switch is a hybrid console. It offers full handheld play, and the ability to "dock the console" to continue playing on your TV (unless you’re using the handheld-only Switch Lite).

It's less powerful than the PlayStation 4 and Xbox One consoles, but even if you're looking to play solely on a TV it's still well worth the investment.

That's mostly down to the software lineup, which is incredible. Games on the Switch tend to fall into four categories, and each is absolutely rammed with worthwhile content.

The first category is obvious - Nintendo's own games. Super Smash Bros: Ultimate is the finest multiplayer game around today, while Super Mario Maker 2 offers unlimited levels and creativity. Meanwhile, the oft-discussed Legend of Zelda: Breath of the Wild is a true marvel even today, despite landing on the Switch (and Wii U) at launch.

Speaking of the Wii U, the second category is Nintendo's own ports from that system. Mario Kart 8: Deluxe, Captain Toad: Treasure Tracker and Donkey Kong Country: Tropical Freeze are all fantastic titles given a second chance to find an audience on a console that seems to be in everyone's hands.

Next up are indies, and they number in the hundreds. Many of the best independent games can be found on Switch, from the excellent Dead Cells, to Hollow Knight, to personal favorite Into The Breach. There are too many to name, and the same can be said of the final category of Switch games: the ports.

"When is it coming to Switch" has become almost a meme at this point, but some publishers are offering impressive support. Bethesda has ported Skyrim, Wolfenstein II (and Youngblood) and Doom to the console, with the latter's sequel on the way.

Free-to-play looter Warframe plays excellently on Switch, too, while Diablo 3 is just as addictive as ever. You may have no desire to play these titles again, but being able to take these huge games on the go feels magical.

That's not all, either. After multiple delays, Nintendo Switch Online is beginning to offer incredible value for money. Costing less than half the price of PlayStation Plus and Xbox Live, the service offers online functionality (albeit not as fleshed out as other services) as well as the ability to play both NES and many SNES games on your Switch - either handheld or on the go.

If you're the type of gamer that's looking to play games on the go, or want a bunch of huge games to stuck into on your TV, then the Switch is an excellent option for your next console.

Is Black Friday the right time to buy?

So, should you buy a Nintendo Switch over Black Friday and Cyber Monday? With Pokemon Sword and Shield, Animal Crossing, Bayonetta 3 and more on the horizon, there's a bank of new games waiting in the wings (you could even ask for them as Christmas presents) - meaning you've plenty of choice when it comes to deciding what to play.

Over the past two years, we've not seen huge Nintendo Switch Black Friday discounts (the savings have been relatively small, and sold out incredibly quickly), but that could all change in 2019.

With both the PS4 and Xbox One in line for healthy discounts over the sales period, and the recent introduction of the new Switch Lite which is unlikely to see a reduction in cost so close to its launch, the original Nintendo Switch is primed for a Black Friday and Cyber Monday saving.

We wouldn't be surprised to see the console drop to its lowest ever price, and you can expect to see some enticing bundle deals packaging top games with the console.

Could the Nintendo Switch price drop lower than the best Black Friday deals? Well, at some point in the future it will, but there's only a small chance it'll get cheaper in December or January.

If there are great Nintendo Switch Black Friday deals to be had, we'll be sure to let you know and you can feel safe in the knowledge you've bagged yourself a top console for less.