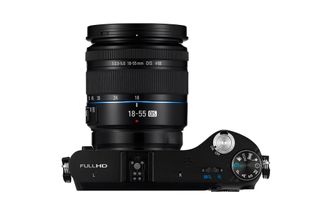 Speaking candidly to TechRadar, White said that 2011 had been a tough year for its compact system cameras and they have failed to achieve the sales figures that the company believe they merit. Despite many favourable reviews, Samsung's CSCs have suffered from fierce competiton and aggressive advertising campaigns from other manufacturers, particularly in the run up to Christmas.

Samsung's current CSCs, the NX11 and NX200 are compatible with the company's iFunction lenses which allow settings adjustments to be made using the lens focus ring. White feels that while this functionality has been widely praised, it has failed to grab the attention of the majority of photographers.

However, by increasing the number of traditional style controls on a future camera, Samsung may be able to grab the attention of experienced photographers looking for a small camera as an alternative to an SLR.

On the subject of SLRs, White confirmed that Samsung's focus is on compact and compact system cameras. The company is concentrating on improving build and image quality as well as integrating cameras into the modern digital lifestyle.

The NX200 is the latest camera in the line-up, and features an APS-C sized sensor housed within a sleek all-metal design. It featured a number of improvements over its NX100 predecessor, and builds on the popular retro stylings of several other products on the market.

Meanwhile, the NX11 is styled like a miniature DSLR, appearing on the market around a year after the very first Samsung CSC, the NX10, made its debut.