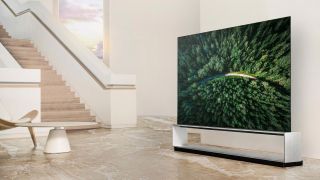 2020 is looking increasingly like the year of 8K, with South Korean manufacturer LG Display gearing up to release not one, not two, but eight brand new 8K TVs for viewers to choose between.

Out of those two, one was an OLED TV (the LG Z9), while one stuck with an LCD panel (the LG SM99), but it's clear LG is putting a lot of stock into the ultra-high definition resolution technology.

The battle for 8K dominance

It's been a close race to see who can pull ahead with 8K, with the likes of both LG and Samsung making their intentions clear – and attempting to ensure their own take on 8K panels seem the most legitimate.

LG's announcement on its 2020 8K sets states that each new model meets the "8K Ultra HD definition set by the Consumer Technology Association (CTA) which requires a minimum 50 percent CM threshold" – CM, or 'contrast modulation' being a metric for the level of contrast achieved between individual pixels.

While LG says this is necessary for "real 8K", the competing standard set by the 8K Association – with members including Samsung, Panasonic, Hisense, and TCL – doesn't use that criteria. The push for 8K excellence is certainly to be welcomed, but it's likely that the competing standards are only going to confuse consumers still getting their head around the advanced panel resolution.

The flurry of new 8K models, too, is likely to put pressure on buyers to commit to an 8K display before there's necessarily the 8K content to warrant the purchase – and we all want to avoid a situation where these sets get into homes before they're truly wanted, or where they simply gather dust on retailer shelves.