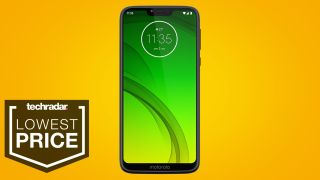 There are some great smartphone deals as part of the Black Friday 2019 sales, especially in Amazon deals, and Motorola phones are some of the most prolific discounts you can find on the web right now.

Seriously, six different Motorola handsets are discounted from two different ranges, so if you want a new device and like the Moto branding, there will probably be something you like here.

In fact, the best deal we've seen on a Motorola handset is on the Moto G7 Power that is its lowest price ever thanks to a Giffgaff deal that brings the price down to £99 after a hefty £80 discount.

Two more Motorola handsets are reduced - that's the Moto G7 and G7 Play with the former getting £59 off, and the latter £30 off. Since they're affordable devices anyway, that brings their costs to a seriously low level.

On top of that, the new Motorola One range also received decent discounts, at least on some of the devices. These are the One Vision, One Action and One Zoom, slightly more high-end devices than the G7 range with impressive camera features. This range of phones is new to 2019, so a Black Friday price cut was anything but guaranteed.

Moto G7 Power: at Giffgaff | SIM-free | £99
The Moto G7 Power has a whopping 5,000mAh battery, bigger than most other smartphones, so it should easily be able to last you a day or perhaps even two. This deal is now £80 off bringing the device under £100 for the first time.View Deal

Moto G7 Play: at Giffgaff| SIM-free | £99
The Motorola G phones are some of the most reliable affordable phones around, so the fact one is now under £100 is pretty hard to believe. If you need a decent smartphone with features that are reaching above its price tag, this is certainly one to consider.
View Deal

Moto G7: at Amazon | SIM-free | £179.99
This is a pretty big price cut on one of the best affordable phones out there right now, making the Amazon-exclusive phone a device you should really consider if you want a new handset without breaking the bank.
View Deal

Motorola One Vision: at Amazon | SIM-free | £219.90
One of the first Motorola One phones, the Vision is slightly more high-end than the G7s, with a 'punch-hole' front camera and a 48MP rear camera. It's not exactly a processing powerhouse, but in general it resembles closely a mid-range phone in everything but price.
View Deal

Motorola One Action: at Amazon | SIM-free | £195
The Motorola One Action is named after its 'action-cam' on the back that lets you record horizontal video when you're holding the phone vertical, great for people who use their smartphones for recording video of stunts and tricks.
View Deal

Motorola One Zoom: at Amazon | SIM-free | £329.99
This is the most high-end Motorola One phone with four rear cameras (including one with a zoom lens, hence the name). It's also got great battery life and a decent screen for the price, so if you've got a bit extra to spend, this could be the Motorola phone for you.

Not in the UK? Here are the best Motorola phone prices in the US. Not all Moto phones are available in the US, but a few are.