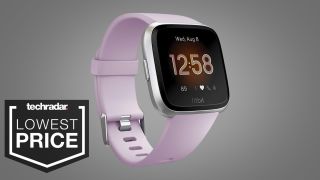 This offer ends on 24 December, or for as long as stock lasts, so you’ll have to act fast if you want to fill your stocking. Luckily Argos is still offering same-day delivery, which is great news if you're on the hunt for a last-minute gift.

The Fitbit Versa Lite is a cheaper version of the more advanced Fitbit Versa 2 smartwatch. You'll lose playback support for music and Fitbit Pay, but the Lite still does what Fitbit devices do best: fitness and sleep tracking. With an excellent four-day battery life and lightweight water resistant casing, it's a great fitness tracker at a fraction of the price of the Galaxy Watch, the best smartwatch right now.

Let’s also not forget the free gift here. The Google Nest Mini is a good addition to any home if you’ve never picked up a smart speaker before. The Nest Mini has full support from Google Assistant, great mics and a decent 1.65-inch speaker. As a standalone offer, it’s a good Christmas gift in itself. You could even put it in your kitchen so you can blast out some Wham while stuffing the turkey.

Fitbit Versa Lite with free Google Nest Mini | £99.99 at Argos
Save £50 and get a free smart speaker with this great-value offer from Argos. Small but perfectly formed, the Versa Lite gives you excellent fitness and sleep tracking at a great price, while the Google Nest Mini is a great addition to any home.View Deal

More pre-Christmas deals on other Fitbits

Like the Versa Lite, but think you can stretch your budget? We've also rounded up some great alternative Fitbit deals for your consideration.

Fitbit Versa | £127.99 at Amazon
The original Versa is still around, and it's now at an attractive price point too. It offers all the Fitness apps you need, but also music playback and Fitbit Pay. Amazon is currently offering a £70 discount in its early Boxing Day sales, so it's definitely worth considering.View Deal

Fitbit Versa 2 | £167.38 at Amazon
If you're looking to splash out a bit more, the latest Fitbit Versa 2 is also on sale at Amazon. With this updated device you get built-in Alexa support, music playback, voice and text integration as well as the new on-screen guided exercises.View Deal

Not what you're looking for? Why not check out our roundup of the best cheap Fitbit sales, where you'll find deals on the full range of fitness trackers; or browse the best smartwatches in our guide.