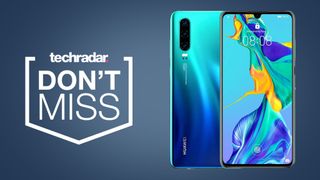 Update: these fantastic Black Friday phone deals were great, and then Amazon cut the prices even more! The Huawei P30 saw a minor price cut, but the P30 Pro cost was slashed by just over £150, which is a fantastic deal. If you're looking to buy a great smartphone for Black Friday, this is definitely one of the best deals to look at.

Sometimes Black Friday deals cut the price of middling phones that didn't sell as well as expected upon launch; this isn't one of those times, as this great Huawei P30 and P30 Pro deal as part of the Amazon Black Friday selection slashes the price of two of the most noteworthy phones of the year.

The Huawei P30 Pro tops our list of the best camera phones at the time of writing, thanks to its array of lenses as well as the RYYB sensor (which takes incredible low-light pictures) and fantastic scene optimization. The P30 has most of these features as well, and just lacks one rear camera from its bigger sibling.

Thanks to Black Friday, the cheaper phone is available now for a whopping £250 off for the 128GB model, dropping the price from £700 to £450. The phone toed the line between premium and mid-range upon launch, but it's a bargain now, and this could be one of the biggest Black Friday discounts we see.

Huawei P30: at Amazon | SIM-free | 128GB | £440
One of the best phones of the year? For photography, at the very least! The Huawei P30 has great photography smarts, as well as a beautiful design and snappy functionality, and this could genuinely be one of the best discounts we see in any phone this Black Friday.

The Huawei P30 Pro, which is a better phone (because bigger equals better, but it has a few extra features too), is also discounted, but not by as much. If you want its extra camera, a large curved screen, and some extra photography features, this is the device to go for.

Huawei P30 Pro: at Amazon | SIM-free | 128GB | with case | £647
This is the best smartphone you can buy for photography right now, and it's an incredible device even if you forget all about the camera. Amazon first discounted the device from £900 to £800, and now it's even cheaper, much more than it has been all year. We've linked to the device bundled with a case, because the case-less bundle is almost sold out at the time of writing.
View Deal