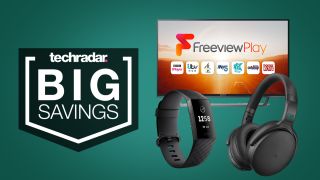 These Amazon Boxing Day sales are saving post-Christmas shoppers cash on this year's hottest tech products, and we're rounding all the best deals up right here.

With plenty of new lines added over the last few hours, Boxing Day is heating up on Amazon despite the retailer already offering plenty of sales over the Christmas period. If you've had your eye on something for a while, or just want to see what's out there, we've got all the best Boxing Day sales listed below.

And who knows, maybe you'll find a deal on something you didn't think you needed until you saw it. Electric toothbrush, anyone?

If you're shopping around for tech today, check out our best Boxing Day sales for more on what's going on today.

If you're looking for a TV, these are a couple of cracking deals we've seen so far - worth checking out if you're in the mood for an Ambilight set:

Philips Ambilight 65-inch 4K Smart TV: £659 at Amazon
This is one of the best large-screen TV deals we've seen out there for the Boxing Day sales - there's HDR10+, Dolby Atmos sound, smart TV apps (although not Apple TV at the moment) and the all-important Ambilight around the outside.
View Deal

Philips Ambilight 43-inch 4K Smart TV: £389 at Amazon
Bag yourself a 4K TV bargain during the Boxing Day sales with the 43-inch Philips 43PUS7304. It comes with 3-sided Ambilight, support for Dolby Vision, Dolby Atmos and HDR10+, plus the Google voice Assistant is built in too.
View Deal

Below, we've rounded up our pick of the best Amazon Boxing Day sales deals we've found so far, and we'll be updating this throughout the day with the biggest and best savings we can uncover.

As a reminder, these sales periods mark a good opportunity to pick up Amazon's devices with discounts, like its Echo range of smart speakers and Fire tablets, although we did see some lower prices on these items over the Black Friday period.

As ever with Amazon, some of the best deals available will only be around for a limited time as part of its Lightning Deals. So you'll want to keep an eye out for new deals launching on Amazon throughout its Boxing Day sales.

Amazon's Boxing Day sales run from now until December 31, so this is the last big selection of holiday deals for now.

Amazon Echo Dot (3rd Gen): £24.99 at Amazon
The last-gen Echo Dot isn't the latest in the line of products from Amazon, and this is a decent discount. Still, we did see it for £22 during Black Friday, so this is not its lowest ever price. View Deal

Amazon Fire 7: £34.99 at Amazon
Want a tablet, but just need something that is basic and affordable? Amazon's Fire 7 range takes a solid discount, here, though it's worth noting that it was another £5 cheaper during the Black Friday sales period. View Deal

Amazon Echo Show 5: £49.99 at Amazon
The Echo Show 5 is the best way to be able to interact with Amazon's Alexa voice assistant in a speaker that allows for a screen to show you certain elements. This matches the Black Friday discount for Boxing Day.View Deal

Amazon Fire HD 8 (2018): £59.99 at Amazon
The Fire HD 8 is a cheap tablet that's small enough to take everywhere and an ideal way to consume Amazon content. This is a decent enough discount, but it was £44.99 during Black Friday, which is worth bearing in mind.View Deal

Philips Hue White and Colour Ambiance (3 pack) | £79.99 at Amazon
Save £20 on this set of three Philips Hue bulbs that also support coloured lighting. These types of smart bulbs allow users to set their own room colours, and are well worth the extra cash if you want to personalise your setup. Linked here is the B22 fitting, but you can also find E27 and even the usually more expensive GU10 fitting for this price. View Deal

LIFX Mini White smart bulb | £14.99 at Amazon
The smaller version of the LIFX white bulb is down to just £14.99 at Amazon today. This is the B22 model, but you can find the E27 for the same price.
View Deal

LIFX Z Starter Kit | £49.99 at Amazon
This LED light strip is a little left field for this selection of smart bulb deals, but you're saving £30 on a great light strip kit, so we had to mention it. You can set up colour zoning and customisation through the LIFX app, making this light strip an easy and cheap way to spruce up your smart lighting setup.


Logitech Z906 5.1 Surround Sound Speakers: £117.99 at Amazon
For Boxing Day only, these speakers take their biggest ever discount on Amazon. They've been around since 2011, but they're THX, Dolby and DTS-certified. Could be a good match for a gaming PC. View Deal

Star Wars Jedi: Fallen Order PS4: £37.99 at Amazon
One of 2019's best games is taking a price cut everywhere for Boxing Day. This is well worth it for under £40. You'll get tens of hours of exploring Star Wars planets and slicing down stormtroopers for your money. View Deal

PlayStation VR Mega Pack with five games: £209.99 at Amazon
Get a VR headset and five decent games to play it on with this PS VR deal. That includes Skyrim in VR and Resident Evil 7, as well Astro Bot: Rescue Mission, widely considered among the best VR games around. View Deal

Xbox Game Pass Ultimate 3 month membership code: £15.99 at Amazon
Normally £10.99 per month if you're subscribed, this gets you three months of the best games-on-demand service around for around half the price. Play games like The Outer Worlds and Halo: The Master Chief Collection to your heart's content.

Nolan 4K Blu-Ray Collection: £53.99 on Amazon
Discounted to its cheapest ever price, this Christopher Nolan 4K Blu-Ray collection features seven of the director's best movies, including the entire Dark Knight trilogy, Interstellar, Dunkirk, The Prestige and Inception. The only glaring omission is Memento. View Deal

Fitbit Charge 3: £94.99 at Amazon
We rank this Fitbit as the best you can buy from the brand right now, with a big screen, lightweight design and a totally waterproof build. Sure, it isn't the newest fitness tracker from Fitbit, but that just means its top-ranking position is even more impressive.
View Deal

Fitbit Charge 3 NFC Special Edition: £119 at Amazon
If the above Fitbit Charge 3 sounds like a great device, but you want NFC for contactless payments too, then this is the deal for you. We've seen it cheaper in deals before, but you probably hadn't set your fitness-centric New Year's Resolutions then.
View Deal

Apple Watch 4: 40mm | GPS + Cellular | White Sport Band | £408.85 at Amazon
This is arguably the best Apple Watch 4 model for exercise, with the sports band and a smaller, less-intrusive body size. With £290 off it's much more affordable, and gets you Apple's 2018 wearable for its lowest ever price.
View Deal

Logitech Z906 5.1 surround sound speaker system | £117.99 at Amazon
This 5.1 surround sound system is down £231 in the Boxing Day sales, meaning you're picking up the full set for just £117 this week. You're getting a full set of THX certified speakers with a command centre as well.
View Deal

Sennheiser HD 4.50 BTNC: £84.99 at Amazon
These are some top-end wireless over-ear headphones, so the £95 discount makes them a bargain. They've got great noise cancelling, a long-lasting battery, and a foldable design that makes them easy to transport.
View Deal

Jabra Elite Active 65t: £131.18 at Amazon
Amazon's Boxing Day Sales have a distinctly fitness-themed slant, and that's the case for Jabra's true wireless earbuds, which are designed to be great for fitness, and also have Alexa enabled. A range of colour options are discounted, but blue is a bit cheaper.

Lenovo Tab E7: £54.44 at Amazon
The Lenovo Tab devices aren't exactly monarchs of the tablet world, but they're affordable enough to make them decent pieces of kit for people looking for something low-price. This model has a 7-inch display and 16GB storage.
View Deal

Lenovo IdeaPad S145: £249.99 at Amazon
The Lenovo IdeaPad is a decent budget laptop, with some impressive features (and some corners cut too, of course). It's fairly robust for a device this cheap, and has a nice big screen, but the battery life and screen resolution could be better.
View Deal

Fujifilm Instax Mini 9 with 10 shots: £54.99 at Amazon
This is a beginner-friendly price for the Instax Mini 9, which is our number one instant camera. You get a 10-shot mini film pack, and the camera has a flash capability, exposure control, and the capability to take selfies and close-ups.View Deal

Instax mini film 50 shot pack: £29.99 at Amazon
Take 50 more credit card-sized photos with your Instax camera. This is compatible with all models, and should be enough to last for a couple of weddings or fancy dress parties.


Samsung 55-inch RU7400 Dynamic Crystal Colour HDR Smart 4K TV: £499 at Amazon
If you want a nice big TV in the Boxing Day Sales, this 4K HDR smart TV is 55-inches big, or so large you'd have to strain your neck to see the corners. It's £200 off too, saving you a decent amount on the overall price.
View Deal

LG 55-inch B9 OLED TV (2019): £1,079 at Amazon
For premium TV hunters, this £700 discount is the ultimate score. For just over £1,000 you get one of the best TVs of 2019 that uses LG's 2nd generation α7 Intelligent Processor to produce clearer and brighter images. If you want better-looking movies, this is the telly to invest in. Model number: OLED55B9PLA.View Deal

Shark Cordless Stick Vacuum Cleaner: £174.99 at Amazon
You get a lean 22 minutes per charge with this vacuum cleaner, but the discount is enormous, and the manufacturer boasts you don't need to change floor heads in order to keep cleaning. That's convenient.View Deal

Tile Pro (2020): £22.49 at Amazon
Constantly losing things, or just got given something over Christmas that you really don't want to lose? Tile trackers are great to help you things you've lost, whether that's your bag, some keys, or a wallet, as they're some of the best item finders you can buy right now.
View Deal

Breville Blend Active Personal Blender: £15.99 at Amazon
If one of your New Year's Resolutions is to get healthy, you're going to need a blender to turn healthy things into tasty things. There's £2 off this Breville personal blender, which you can put towards your first batch of kale or chia seeds (or fruit).
View Deal

Oral-B Genius 8000: £69.99 at Amazon
You can save a whopping 75% (or £210) off the price of this high-end Bluetooth-enabled electric toothbrush, complete with a charging stand, case, and even multiple heads. If you're feeling Christmas dinner-related regret, this is the purchase for you.
View Deal

Anker USB Plug: £7.19 at Amazon
There are so many different circumstances that might necessitate you plugging two USB devices into the wall at once, especially if you've got loads of tech or people staying. This plug from respected tech manufacturer Anker will cover you in all those situations.
View Deal

Braun BT5060 Beard Trimmer: £29.99 at Amazon
Did you see your relatives over Christmas and get lots of comments on the state of your facial hair? Well don't worry, you can acquiesce to their requests (or at least stylise a bit) with this affordable Braun beard trimmer.
View Deal

Sonos Beam: £329 at Amazon
One of the smartest soundbars on the market, the Sonos Beam will be the central part of your connected music eco-system, just as comfortable with bombastic film soundtracks as it is with plaintive classical music melodies – this price did drop to £319 at one point, but £70 off is still a good deal.View Deal

How long do Amazon's Boxing Day sales last for?

Amazon's Boxing Day sales end on December 31, according to the website. Until then, we expect to see new Boxing Day deals every day in the run-up to New Year. It's worth keeping that in mind if you have a particular product you're waiting for a big discount on.