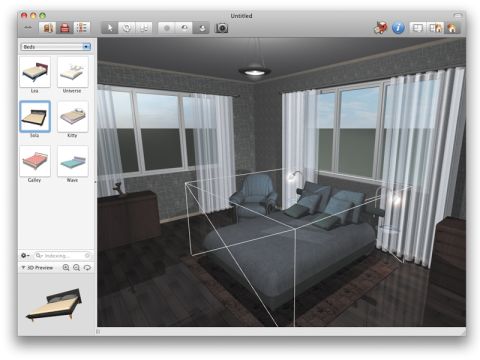 BeLight's Live Interior 3D lets you redesign the interior of your house without having to get a single tool out other than your Mac.

You can view and edit in either 2D or 3D, perform realistic virtual walkthroughs inside the interior, shoot movies, make screenshots and generate panoramic views of the interior and share it with others.

Also, you don't have to spend time drawing furniture, since the program comes with hundreds of objects and materials.

While version 1.0 was good, it had flaws, many of which have been fixed in version 2.0. You can now model two storeys of your house, including the stairs; a Wall Designer lets you create panels, niches and openings in the walls; you can use reflective materials, which will render in real-time during walkthroughs; there's more than 300 new materials and 200 new objects; and the user interface has had a makeover itself.

You can share your designs by exporting them to Google's 3D Warehouse in SketchUp format. The interface isn't totally intuitive yet, with double clicking of objects never doing what you'd hope for.

You can't design your own furniture within the program and some of the features available in the expensive Professional version ($130 (£88) v $50 (£33) for the Standard version), such as the ability to create multiple light sources and handle more than two storeys, would have made the Standard version great.

But even as it stands, you'd be very hard pushed to find a better interior design tool even at twice the price.