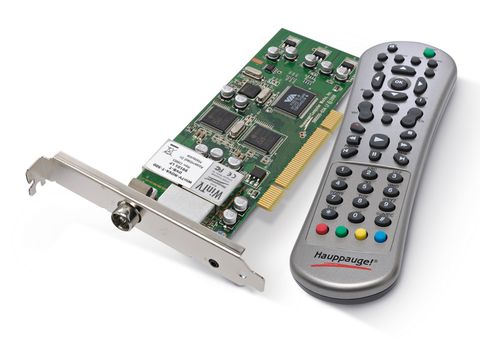 If you want to watch or record Freeview on your PC, then this is one of the more elegant solutions around

When you've got a desktop machine with a spare PCI slot, an internal TV like the WinTV Nova TD 500 PCI card really is the most elegant solution going.

The Elgato Eye TV Sat demands an external power brick, a USB cable, an external aerial and a good few inches of desk space. In contrast the WinTV Nova requires only the signal source, though to use the remote you do need to make a slight concession and run the included IR receiver cable from the rear of your PC to the front.

Installation is astonishingly simple once you've crossed the hurdle of inserting the card into the depths of your PC – we had it up and running in 10 measly minutes, and there's a half-height bracket included for the sort of slim under-TV computer case that's crying out for this very card.

Hauppague's WinTV software is, after experiencing the horrors of Terratec's effort, refreshingly decent; select your local transmitter and it seeks out the relevant DVB multiplexes in seconds. We found WinTV far quicker than Windows Media Center in this respect.

It's easy to use, too. Creating recordings is very straightforward, managing them equally so, and the EPG is very well presented.

Hardware-wise it's a simple package: a twin-tuner Freeview (DVB-T) setup accepting a single aerial input. It's digital only, and when compared with a dedicated Freeview box on the same antenna, it appears highly capable in terms of signal strength.

Analogue TV hasn't long left so the lack of support isn't exactly a problem, but it does mean you won't be able to make use of a cheeky RF link from, say, your cable box, in order to record non-digital signals on your PC.

The WinTV Nova TD 500 is also showing its age: it's about to be made slightly obsolete by the introduction of cards supporting the MPEG-4 format favoured by UK Freeview HD broadcasts.

We would suggest holding on for a true HD-capable card, but you might have a long wait; manufacturers don't seem to be rushing them to market.