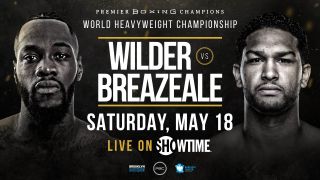 New York is ready to rumble. The awesome Deontay Wilder is back in the ring, this time with fellow American heavyweight Dominic Breazeale. The WBC heavyweight title is on the line but perhaps even more than that...Wilder's reputation as one of the fiercest fighters on the planet. Will he remain undefeated after tonight? You can find out by grabbing a Wilder vs Breazeale live stream wherever you are using this handy guide.

Wilder vs Breazeale - where and when?

What date is it? Fight night has arrived. The Deontay Wilder and Dominic Breazeale fight is set for today (Saturday, May 18) in New York City

Where is it? The Barclays Center in Brooklyn, New York

Deontay "The Bronze Bomber" Wilder (40-0-1, 39 KOs), 33-year-old heavyweight champion, will put his impressive record on the line against powerhouse challenger 33-year-old Dominic "Trouble" Breazeale (20-1, 18 KOs). As you can see from those stats these two are both knock-out specialists which should make for a really high power pairing.

While Wilder is undefeated as belt holder, Breazeale has lost one of his 21 fights in a seventh-round knockout by unified world heavyweight champion Anthony Joshua in 2016. So while Wilder is one of the fiercest fighters out there, Breazeale is no bum either.

Basically put...don't miss this match if you're after some intense heavyweight boxing action. We'll do our part by telling you how to get a Wilder vs Breazeale live stream from absolutely anywhere in the world.

If you want to watch the boxing outside of your country you may find that the content is geo-restricted. That could mean that, despite having access when on home turf, you are blocked while away. Fret not, that can be rectified with the use of a clever piece of software called a VPN.

Once you've downloaded and installed this software you are able to change where you appear to be thanks to some smart IP address bouncing. That not only gets around geo-restricted content but also helps keep your identity more secure when online.

These Virtual Private Networks are thankfully easy to use. Simply select one of our top three best VPN picks below (or opt straight for our number one favorite ExpressVPN), open it up and pick out your country of choice from the 'choose location' menu, and then start watching as if you were sat back at home. Easy!

1. ExpressVPN: the best all-round VPN for streaming, comes with 30-day money back guarantee and 3 months FREE when you sign up for an annual plan
2. NordVPN: one of the most affordable choices for streaming and really effective, too
3. IPVanish: super secure and able to work on a whopping 10 devices, at the same time

And don't get the impression that this is all VPNS are any good for. They've also become the first line of defence for millions of people against cyber crime and security breaches.

How to watch Wilder vs Breazeale: US streaming

If you've got a Showtime subscription in the US, this is the best way for you to watch the Wilder vs Breazeale fight. It won't cost you any extra and you'll find it in all the normal places you watch Showtime (e.g. Amazon Fire TV, Roku, cable providers, etc).

If you don't subscribe already, there's a seven-day free trial but you'll need a US registered payment card to be able to use that. After the seven days it'll cost $10.99 a month, so be sure to cancel it if you don't want to keep it going.

Showtime has a variety of different streaming providers including an app for Android and iOS, but if you're travelling you may want to use a VPN to ensure you're able to stream it from anywhere.

How to watch Wilder vs Breazeale fight in the UK

Those in the UK with Sky Sports TV will be able to watch the fight for free, although you will have to stay up to beyond 2am for the pleasure.

It's on the Sky Main Event and Sky Sports Action channels if you already subscribe, plus you'll be able to live stream that directly from the Sky Go app or on your computer too.

If you don't have Sky Sports normally, there is a way to watch it in the UK. NOW TV offers a Sky Sports Day Pass, which if you buy for £7.99 will give you access to both of the above channels. Be sure to make the most of that Day Pass and watch as much sport as you can in 24 hours.

That pass will work on select smart TV devices, PC, Mac, iPad as well as iPhone and Android devices with the respective apps too. Plus if you're out of the UK and need a stream we can recommend a VPN to change your IP location.

How to live stream Wilder vs Breazeale in Australia

The action will be shown on the paid-for services, Fox Sports and Kayo Sports. The Kayo Sports Basic Package costs $25 per month and allows users to stream across two devices simultaneously. Alternatively, the service also offers a Kayo Sports Premium Package, which provides three concurrent streams for $35 per month.

Their apps mean you can access this from your chosen device wherever you are (although you'll need a VPN if you're taking that abroad).