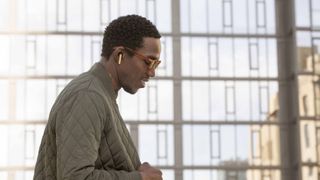 Noise-cancelling true wireless earbuds are becoming increasingly common since being popularized by models like the AirPods Pro and the Sony WF-1000XM3 – but the House of Marley Redemption ANC might be the first to be truly eco-friendly.

Despite coming with active noise cancellation, these earbuds aren't as expensive as their counterparts, costing £179.99 – that works out at around $230 / AU$345, though global pricing is still to be confirmed.

Good for the planet (and your wallet)

The battery life of the new true wireless earbuds comes in at five hours for the buds themselves, with a further 15 provided by the charging case, for 20 hours in total. That's around five hours less than the AirPods Pro, although you can boost that to 28 hours if you turn off the active noise cancellation.

Touch controls on the stems of the earbuds allow you to control your music playback, take calls and adjust the level of noise cancellation.

If you want to quickly switch off noise cancellation, a triple tap to the touch sensitive stems will enable Ambient Mode, which should allow you to hear your surroundings; handy if you're crossing a busy street or ordering a coffee.

Support for Bluetooth 5.0 should ensure a stable wireless connection, while an IPX4 water resistance rating means the Redemption ANCs should be suitable for working out with (just don't take them in the shower with you when you're finished).

House of Marley hasn't revealed much in the way of audio specs, but says that they provide "a deeper, punchier bass with a warm and rich, natural feel" – presumably in comparison to their previous model, the Liberate Air true wireless earbuds.

We'll have to try them for ourselves to find out if the new wireless earbuds improve upon their predecessors, but in the meantime, if you're looking for a pair of AirPod-alternatives that won't wreck the planet (or your bank balance), the redemption ANCs may be worth a look.