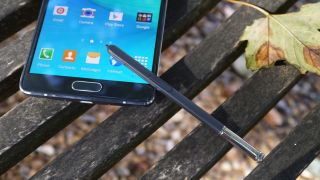 Samsung's second flagship of 2015 has been leaked in full

We're likely just hours away from the announcement of the Samsung Galaxy Note 5, as Samsung is holding its unpacked event today at 11am EST / 4pm BST, but for the impatient among you a new series of leaked images seemingly shows us the phone in exquisite detail.

The photos, which were shared with Nowhereelse.fr, are supposedly of a dummy unit of the phone, but one designed for display in shop windows, so the design should match the real handset.

The images show the Samsung Galaxy Note 5 in both white and gold. While they don't really show us anything we haven't seen before they do match previous leaks and give us a close view of the phone at almost every angle.

It all matches up

They highlight the S Pen slotted into the bottom corner and once again show only one covered slot, suggesting that there won't be microSD card support.

As always these photos could be fake, but they certainly look like the real deal and this close to the announcement we'd expect accurate leaks.

Either way we'll know soon enough and if the other rumours we've heard prove true there may not be many surprises at Samsung's announcement, as not only has the design of the phone been leaked but so too have the specs, with an Exynos 7420 or 7422 processor, 4GB of RAM, a 5.7-inch QHD screen and a 16MP camera all rumoured.