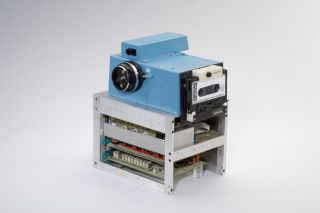 Americans! Grab that Samsung Blast or LG Shine while you can - Kodak is trying to prevent the importation of Samsung and LG cameraphones on the grounds of patent infringement.

Eastman Kodak, the company that missed the transition from 35mm to digital in a big way, is filing complaints in a New York court and the US International Trade Commission - a tactic that, if successful, enables it to block the import of offending products.

Kodak is alleging that some Samsung and LG mobiles infringe Kodak digital camera patents related to image capture, compression and data storage, as well a method for previewing motion images.

"Kodak has a long history of innovation and we have invested many millions of dollars developing our digital camera technology," said Laura G. Quatela, Vice President of Eastman Kodak.

You can see the results of that multi-million dollar high-tech investment in the M1033 camera, which we reviewed in September and summed up as, er, "incredibly cheap".

Apparently, Kodak has licensed its imaging patents to many other leading mobile phone makers, including Motorola, Nokia and Sony Ericsson. Could more lawsuits be on the way?