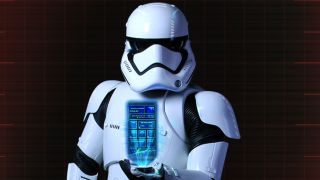 The Star Wars 7 movie release is still months away, but you can feast on the official Star Wars app starting today.

Some Star Wars app highlights include weather forecasts for spots like Tatooine, classic sound effects and quotes (think light saber clashing and "It's a trap!") and alerts for major movie news and new trailers.

There's plenty of fun stuff to do, like sharing animated GIFs, picking up trivia from This Day In Star Wars History or following along with the Star Wars: The Force Awakens countdown ticker. Perhaps the app's best offering though is the "selfie" feature, which lets users snap a pic in classic character garb and Star Wars settings.

The app also lets users unlock 3D characters using an augmented reality camera feature. At the week's San Diego Comic-Con, a special poster will be on display that lets app owners do just that.

Check out the app trailer (yes, it has a trailer) below and download it for iOS and Android if you're feelin' the Force: