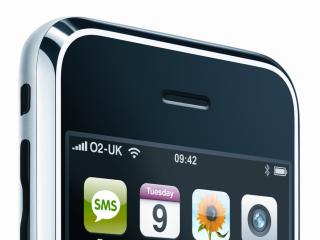 Apple has sold over a million iPhones in the US so far, with a staggered European launch set to kick off on 9 November in the UK

AT&T, the American phone network with an exclusive deal to sell the Apple iPhone, has announced a 42 per cent increase in its profits. After many analysts said that the deal might not make AT&T any money, it appears that the iPhone has been popular enough to make cash for both Apple and the US network.

AT&T's profits went up by nearly a billion dollars over the last three months. The iPhone deal certainly helped contribute to this rise - AT&T's exclusive deal has boosted mobile phone profits by around 14 per cent.

This sort of sales-boost bodes extremely well for O2, which has the exclusive rights to sell the iPhone in the UK. O2 will begin offering iPhone contracts here on 9 November and, if iPhone fever in the US is any indication, we should expect consumers to be queuing out of the doors on launch day.

Not only is Apple raking in profits from the iPhone handset, it's also taking a large slice of the income from the iPhone contracts themselves. Early press speculation about the the deals suggested that networks wouldn't have a chance of making the deals work.

It's believed that O2 snagged the iPhone deal in the UK because it was the only network that didn't baulk at Apple's costly terms - 40 per cent of iPhone contract revenues. The Guardian Online reported that another unnamed UK mobile operator had described Apple's terms as "madly money-losing".

The trend for iPhone unlocking could still pose a problem. According to Bloomberg, of the 1.4 million iPhones that Apple has reported sold, AT&T has activated 1.1 million (since the iPhone became available on 29 June).

It's estimated that there are around 250,000-300,000 unlocked iPhones being used outside the AT&T network. That's still good news for Apple - it gets the money for the hardware sales. It doesn't make such happy reading for AT&T and O2, however.

If anything, the availability of the iPhone in European territories should force sim-free iPhone sellers to drop their prices. Websites and US eBay auctioneers are often selling on iPhones with a 50-100 per cent per cent markup.