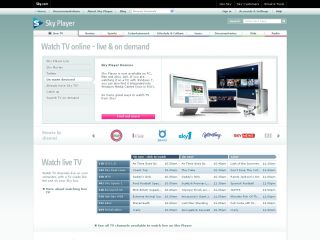 Sky Player - living in the now

Sky has announced that it has increased its Sky Player channel line-up to 30, with the launch of five new live channels to the service.

The first, which is available now, is Sky1. This means that you will now be able to access all of Sky1's content live via Sky Player – great for those who have a penchant for Lost, 24 and, er,

Other channels which will be available later in the month include Sky Movies Premiere and Sky Movies Showcase.

Here you will be able to view many a blockbuster movie and the upcoming Steven Spielberg World War II drama The Pacific.

And if that wasn't enough live channels from Living and Bravo will be launched soon.

"It's about providing people with the most convenient way to access the channels and programmes they enjoy."

To get Sky Player, you have to have a Sky subscription or subscribe to the online only service from £15 a month.

It can be viewed on your computer or through the Xbox 360.