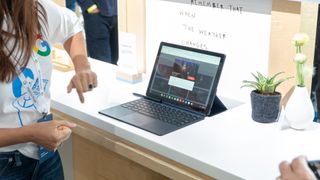 The Google Pixel Slate is finally available - to pre-order, at least.

Google's 2-in-1 gadget aims to meld the convenience of a modern Chromebook with the portability of a slim tablet. The Google Pixel Slate is available in five configurations, from a basic 32GB tablet with Intel Celeron processing and 4GB RAM, to a more advanced model with 256GB storage, an Intel Core i7 processor, and 16GB RAM.

For all the talk of convenience, though, buyers will almost certainly need to purchase the add-on keyboard for $199 to make full use of the Slate - if not the $99 Pixelbook Pen as well.

All signs point to a release date before November 23 - or Black Friday, as you may know it - in order the make the most of the seasonal sales. With the Slate only just having gone on pre-order, though, we may see it land pretty close to the finish line.

Google's own retail page specifies a two-three week wait for the Slate, while Best Buy in the US plans to ship out as late as November 22. We're unlikely to see a Black Friday discount, really, for a product that's only then going on sale, but the Google Pixel Slate could shift a good few units given its likely release date.