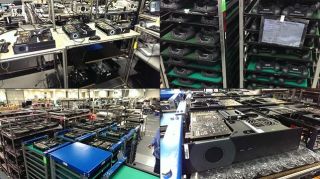 Valve's Steam Machine train hasn't lost any ... you know ... since the trifecta of announcements we were treated to in September. Now, the company's console is mere days away from making it to users' hands.

Valve has announced that its own Steam Machine prototypes and Steam Controllers will ship to the beta program's 300 participants on Friday, December 13.

Valve's play to put PC gaming in the living room will arrive packing SteamOS, meaning the lucky 300 can start testing and playing games (thanks to access to SteamOS-native titles) soon.

The beta program, Valve explained, has been limited to the US because of "regulatory hurdles." The company had planned to include testers from around the globe, but the alternative was to delay the beta so long that feedback wouldn't be included in the 2014 products.

Steam Machines will be out in full force at CES 2014. In today's announcement, Valve said more information on the commercial versions of Steam Machines is due at the January tech show.

Not that we didn't already know that, but it's nice to get re-confirmation straight from the source.

Valve also revealed that when its Steam Machine prototype hardware ships, SteamOS will become available and downloadable by users and commercial OEMs alike. However, it warned that unless you are "an intrepid Linux hacker already, we're going to recommend that you want until later in 2014 to try it out," suggesting the version that will be available could mean risky business for the average user.

Tacking onto Valve's announcement is word from one Steam Machine purveyor regarding specs and pricing for its take on the open-source, Linux-based gaming console.

Digital Storm offered up a smattering of details, though we still have to wait until CES to see its Machine in the flesh.

The company said its device will "defy they cookie-cutter mold," and to that end the hybrid machine will dual-boot both SteamOS and Windows.

Options for the Digital Storm Steam Machine include a Nvidia GeForce GTX Titan graphics card and 700W power supply. The boutique firm's custom build has liquid cooling for the CPU and, according to Engadget, airflow thermal management.

If your jaw just dropped, know Digital Storm is setting out not to compete price-wise with the Xbox One and PS4. Still, that's a good chunk more than iBuyPower's $499 (about £307, AU$547) Steam hardware offering.

We knew we in for Steam Machines of varying shapes, specs and prices. Let's just hope Digital Storm's version justifies the price tag.