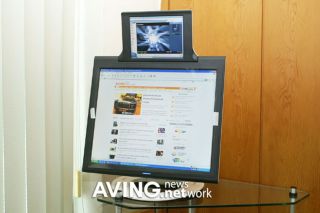 AVing of Korea is reporting that their compatriots at Woojin are readying an innovative 19-inch PC monitor with a smaller sub-display sprouting from the top of the casing for sale in May.

Still unpriced, the Tenbuno LCD has a resolution of 1280 x 1024 pixels, an 8ms response time and a 700:1 contrast ratio, putting it firmly in the mid-range of monitors, although the appeal is bound to be in the flexibility of that mini screen up top.

The 8.4-inch sub display manages only 800 x 600 on the resolution front, a 10ms response and is just half as contrasty, but that's unlikely to matter to those who will benefit from it most.

Woojin reckons the small screen is perfect for, well, the small screen, suggesting that it's used as an alternative to TV picture in picture. Other possibilities see the display being used to accommodate palettes used in programs like Photoshop, maps in role-playing games or for keeping an eye on the non-stop Tech.co.uk RSS feeds as they roll by.