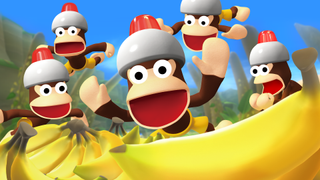 We may have just seen the reveal of a host of brand new games at E3 2019 that have us looking to the future, but that doesn't mean we can't keep an eye on the past too in hopes that we'll see some more classic titles making a return.

Final Fantasy 8 Remake, Link's Awakening and Ghostbusters: The Video Game are just a few of the games that developers have announced are receiving a modern makeover, and it seems like another classic caper could be undergoing the same treatment.

Sony's Ape Escape could be the next title getting a remaster or remake and, with at least three games in the series, we think it might be a trilogy.

Although this hasn't actually been confirmed by Sony, a tweet from Twitter user piposaru20th (spotted by Eurogamer) suggests a remaster is on the way.

Check out the tweet below (yes, it's in Japanese but we'll get to that):

Now, we always advise to take any rumors with a big pinch of salt, but there are actually a few aspects of this rumor that hint it could be legit.

Firstly, it's Ape Escape's 20th anniversary this year (while the Western anniversary has just passed, the Japanese anniversary is this month). Spyro: Reignited Trilogy released 20 years after the game's original release in 1999, so it would make sense for Ape Escape to be the same.

Which brings us on to the Japanese tweet itself. The tweet is from piposaru20t, which roughly translates to Pipo Monkeys in English. The Pipo Monkeys are the name for Ape Escape's Apes and the tweet seems to be from one of the dastardly sapians, roughly translating to: "Twenty years from that. I've been running around for a long time, but I wonder if there are any guys out there to chase ...?)"

While the account isn't verified, it is followed by the official Sony Japan Twitter account, suggesting it's the real deal.  Plus Sony is already releasing a remastered version of MediEvil later this year, so it's entirely possible it could be gearing up to remaster some other classic PlayStation titles for current/next generation consoles.

So what actually is Ape Escape? The PlayStation classic originally released in 1999 and saw you on a mission to capture some confused apes in a net who have been brainwashed by a mass-produced helmet and are causing chaos. Just the usual.

The series spawned several spin-off titles, but there were four core games in the main franchise (in the West). That leads us to think that maybe, just maybe, an Ape Escape remaster could take the same form as the Crash Bandicoot N.Sane Trilogy and Spyro: Reignited Triology, with three games rolled into one.

There's also the possibility that there's not a new game at all, but instead we will finally see the release of Piposaru 2001 in the West. This was the sequel to Ape Escape that only released in Japan and seen you vacuuming the trousers of the Apes rather than catching them.

Either way, it seems like Sony has something up its sleeve when it comes to Ape Escape and we can't wait to see what it is...