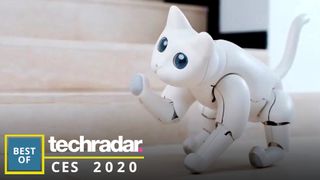 CES 2020 played host to a huge collection of strutting and rolling robots, designed to handle everything from everyday chores to nurturing human kindness. Perhaps as a reflection of our increasingly high-stress lifestyles, this year's show was also populated by a surprising number of robots designed to provide companionship and alleviate loneliness.

Robot pets are nothing new (Sony's dog-bot Aibo made its debut in 1999), but the new generation of mechanical beasts are quite different; all soft fur and limpid eyes, designed to appeal to our need to protect and nurture.

The future is surprisingly cuddly – so after much petting, tickling and fussing, here's our guide to the best robots of CES 2020…

MarsCat is a robotic pet that appears, at first glance, to be a feline version of Sony’s robot pup Aibo, but the two are actually quite different. While you can’t teach an old Aibo new tricks, MarsCat is open source and controlled by a Raspberry Pi, so you can tinker with it to your heart’s content.

Even if you’re not into tinkering, MarsCat still has a lot to offer, performing various cat-like tasks independently, with no input from you. It will also respond to your touching its head or chin, and you can even give it voice commands (though, like a real cat, it might not listen). Your interactions will help develop its ‘personality’, which will determine how vocal, frisky and friendly it is.

MarsCat has already raised more than five times its funding goal on Kickstarter, with several weeks still to go. It’s expected to sell for $1,299 (about £1,000, AU$2,000), which is a hefty sum, but less than half the price of the latest Aibo.

Sticking with the feline theme, Bellabot is a bizarre cat/trolley hybrid that will bring you dinner and allow you to pet its ears. Just don’t get carried away; BellaBot has a job to do, and will become annoyed if you distract it for too long with excessive affection.

Serving bots have been scooting around Chinese restaurants for some time now (we encountered the similar Peanut serving robot from Keenon Robotics at CES Asia 2017), but the addition of ears and whiskers makes BellaBot far more appealing, as does its temperamental personality.

If tickles and tummy rubs are your main reason for wanting a feline friend, Petit Qoboo could be the weird almost-animal for you. A furry therapy pillow with an expressive tail, this companion robot looks for all the world like a disembodied cat butt.

A larger model is already available to buy on Amazon for $149 (around £100, AU$200), but the Petit model debuted at CES 2020 is still in the prototype stage. Its creator, Yukai Engineering, is working to an ambitious schedule, and hopes its miniature cat butts will hit the shelves at the end of the year.

Samsung Bot Chef amazed us with its culinary abilities on the show floor, whipping up an impressive tofu salad with only minimal help from a human assistant.

Bot Chef consists of two highly articulated arms with three-fingered hands, which are mounted under kitchen cabinets. Although it didn't handle the chopping, it did rummage for ingredients, measure and pour them, and use utensils to mix them with lifelike dexterity.

The bot responds to voice commands, and once you've chosen what to cook a screen embedded in the cabinets shows each step of the process, with different steps for the right arm, left arm and human helper.

Samsung's spokesperson wouldn't give an estimated price tag for installing your very own robotic (but less shouty) Gordon Ramsay, but said it would "read more like a kitchen appliance than a luxury car", which would be remarkable if true.

One of the most amusing novelties at CES, RollBot is a vaguely bear-shaped machine that balances on two wheels, Segway style, and will bring you a fresh roll of toilet paper if you run out. RollBot is Bluetooth-enabled, so you can summon a RollBot from your phone while scrolling through your Facebook news feed. It finds its way around your home much like a robot vacuum cleaner, balancing your refill roll on its hexagonal head.

Sadly, entertaining though it may be, RollBot won’t be tapping on your bathroom door with a new roll any time soon. It’s been developed as part of Charmin GoLab – a concept lab that will allow the paper brand to “finally expand beyond just the seat” according to brand director Rob Reinerman.

Reachy’s bouncing antennae make it look vaguely insect-like, which is unfortunate because it’s a remarkable feat of engineering. Each arm has seven degrees of freedom, and its specialized neck joint allows its head to pan, twist and tilt in a surprisingly lifelike way.

Like MarsCat, Reachy is open source – you can use Python to create your own programs for it to run, and developer Pollen Robotics suggests it could be used for research and development, as a robotic receptionist, or as a helpful tour guide.

Ballie, a surprise announcement from Samsung, is a brightly-colored rubber ball festooned with camera lenses that somehow still manages to be adorable. A promotional video shows it rolling merrily around a smart apartment, interacting with the TV, robot vacuum cleaner, curtains… and a corgi. It even rolls up to its owner's hand when called.

While it's only a concept for now, the idea is that Ballie will roam your floors, interfacing with existing gadgets and giving you something tangible to interact with, rather than a vague concept of 'home'.

It's a nice idea, though we can't help thinking the corgi just about has the edge when it comes to cuteness.