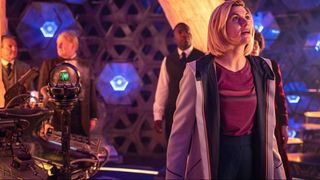 Daleks, time lords, the tardis, it's fair to say that season 12 of Doctor Who has been filled with mystery, adventure and quite a few surprises. And now it's almost time for the two-part finale!

So if you don't want to miss a second of the fantastical action keep reading to find out the best way to watch Doctor Who season 12 online.

It may be season 12 but that doesn't and hasn't meant that Whovians haven't gotten a strong dose of action from the latest doctor - Jodie Whittaker.

Not only did Captain Jack return, but we also saw the Judoon targeting the 21st-century Gloucester. Don't worry if you still need to catch up on a few episodes, we won't spoil anything here.

But now we're ready for the two-part finale, where a few mysteries will be answered. Graham, Yaz and Ryan will return home to find themselves haunted by very different experiences, and Team Tardis will embark on a mission that forces them to face their darkest fears.

Ready to watch the spectacular Doctor Who season 12 finale online? We've listed everything you'll need to know about catching the latest episodes below. And don't worry if you're on holiday or living abroad as the episodes air - we've got you covered too.